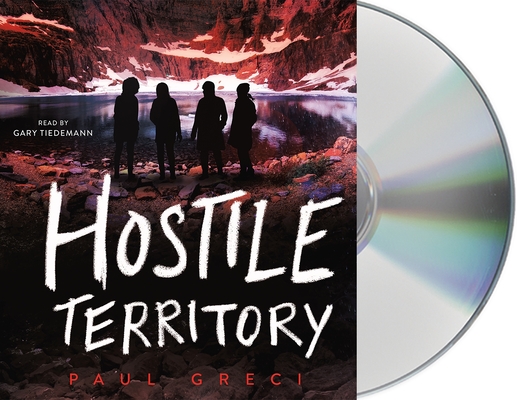 By Paul Greci, Gary Tiedemann (Read by)
$44.99
Email or call for price

In Paul Greci’s Hostile Territory, a catastrophic earthquake strands four teens in the Alaskan wilderness—and leaves them without a civilization to return to.

Josh and three other campers at Simon Lake are high up on a mountain when an earthquake hits. The rest of the camp is wiped out in a moment—leaving Josh, Derrick, Brooke, and Shannon alone, hundreds of miles from the nearest town, with meager supplies, surrounded by dangerous Alaskan wildlife.

After a few days, it’s clear no rescue is coming, and distant military activity in the skies suggests this natural disaster has triggered a political one.

Josh and his fellow campers face a struggle for survival in their hike back home—to an America they might not recognize.

“In Greci’s intense survival tale with a thriller component, four teens endure a harrowing trek across the Alaskan wilderness . . . It’s clear that Greci (The Wild Lands) knows his landscape—Alaska’s beauty and natural hazards become their own vivid character in his handling.” —Publishers Weekly

“Readers will feel like they are in Alaska alongside the characters... Recommended for teenagers who like postapocalyptic adventure or are fans of Gary Paulsen’s Hatchet.” —School Library Journal

Paul Greci has lived and worked in Alaska for over twenty-five years as a field biology technician in remote wilderness areas, a backpacking trip leader for teens, and a naturalist for several outdoor education programs. His middle grade adventure novel, Surviving Bear Island, was a Junior Library Guild Selection and a Scholastic Reading Club Pick.