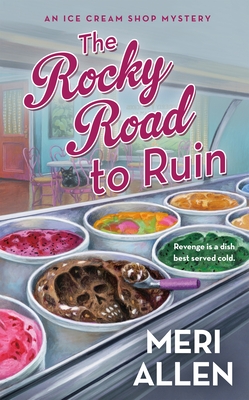 This is book number 1 in the Ice Cream Shop Mysteries series.

Justice will be swirled by amateur sleuth Riley Rhodes in the first in Meri Allen's brand-new mystery series, The Rocky Road to Ruin!

Riley Rhodes, travel food blogger and librarian at the CIA, makes a bittersweet return to her childhood home of Penniman, Connecticut – land of dairy farms and covered bridges - for a funeral. Despite the circumstances, Riley’s trip home is sprinkled with reunions with old friends, visits to her father’s cozy bookshop on the town green, and joyful hours behind the counter at the beloved Udderly Delicious Ice Cream Shop. It feels like a time to help her friend Caroline rebuild after her mother’s death, and for Riley to do a bit of her own reflecting after a botched undercover mission in Italy. After all, it’s always good to be home.

But Caroline and her brother Mike have to decide what to do with the assets they’ve inherited – the ice cream shop as well as the farm they grew up on – and they’ve never seen eye to eye. Trouble begins to swirl as Riley is spooked by reports of a stranger camping behind the farm and by the odd behavior of the shop’s mascot, Caroline’s snooty Persian, Sprinkles. When Mike turns up dead in the barn the morning after the funeral, the peace and quiet of Penniman seems upended for good. Can Riley find the killer before another body gets scooped?

MERI ALLEN is the author of the Ice Cream Shop Mysteries, which begin with The Rocky Road to Ruin. She lives in a quiet corner of Connecticut, where she haunts libraries, used book stores, and vintage shops.

"Delightfully framed by the details of making ice cream and running an ice-cream shop, this cozy mystery series-starter is populated with well-drawn characters living in a vividly described New England town." --Booklist