The Brightest Star in Paris: A Novel (Paperback) 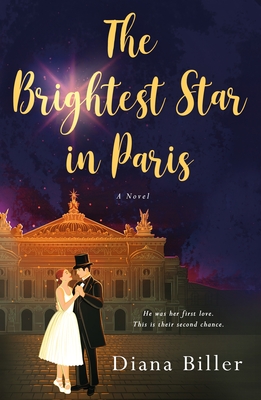 Diana Biller's The Brightest Star in Paris is a thrilling story of first loves and second chances.

She never expected her first love to return, but is he here to stay?

Amelie St. James is a fraud. After the Siege of Paris, she became “St. Amie,” the sweet, virtuous prima ballerina the Paris Opera Ballet needed to restore its scandalous reputation, all to protect the safe life she has struggled to build for her and her sister. But when her first love reappears looking as devastatingly handsome as ever, and the ghosts of her past quite literally come back to haunt her, her hard-fought safety is thrown into chaos.

Dr. Benedict Moore has never forgotten the girl who helped him embrace life after he almost lost his. Now, years later, he’s back in Paris. His goals are to recruit promising new scientists, and maybe to see Amelie again. When he discovers she’s in trouble, he’s desperate to help her—and hold her in his arms.

When she finally agrees to let him help, they disguise their time together with a fake courtship. Soon, with the help of an ill-advised but steamy kiss, old feelings reignite. Except, their lives are an ocean apart. Will they be able to make it out with their hearts intact?

"I foresee years of excellent storytelling from Diana Biller; the certainty of that excites me." - Smart Bitches, Trashy Books

Diana Biller is the author of The Widow of Rose House and The Brightest Star in Paris. When she isn’t writing, she enjoys snuggling her animals, taking “research” trips abroad, and attending ballet class. She lives with her husband in Los Angeles.

"I foresee years of excellent storytelling from Diana Biller; the certainty of that excites me." - Smart Bitches, Trashy Books

Praise for The Brightest Star in Paris:

"In the gorgeously written The Brightest Star in Paris, Biller provides a fascinating view into the psychological makeup of two haunted lovers... A stunning novel of tender emotions amid harsh circumstances." - BookPage, starred review

“Readers will be moved by the story and its handling of grief as well as its magical second-chance romance.” - BookBub

"Diana Biller is a breath of fresh air in the historical romance genre. I can’t wait to see what more she has up her talented sleeves." - The Infinite Limits of Love

"This was such a poignant, emotional, second-chance romance... I am so looking forward to whatever journey this author takes her readers on next." - Smexy Books

Praise for The Widow of Rose House:

"A chemistry-fueled debut with a bit of a ghost story, great for readers of gothic romance." - Booklist

"The Widow of Rose House is close to perfection and any lover of historical romance will adore this debut." - Smart Bitches, Trashy Books

"A ghost-hunting adventure and sweeping romance in equal parts, and peppered with moments of breath-holding tension, it amazes me that this Gilded Age gem of a story is a debut effort. It’s a moving, evocative, beautifully told and, at times, chilling read, and even when I desperately wanted to speed ahead to find out what happens in the end, I made myself savour every exquisite last word of it." - Natasha is a Book Junkie

"Utterly irresistible. With engaging, original characters and dialogue as crisp as a new apple, Diana Biller’s debut will have you rooting for Alva and Sam through every spooky twist." - Deanna Raybourn, New York Times bestselling author of the Veronica Speedwell series