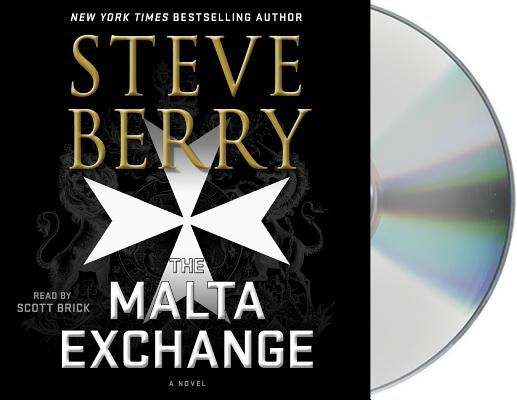 This is book number 14 in the Cotton Malone series.

"Brick is a masterful narrator, raising the tension in the action scenes while keeping the listener engaged in the slower historical segments." — AudioFile Magazine

In this audiobook, Steve Berry and Macmillan Audio team up again to bring listeners an expanded, annotated Writer's Cut edition of The Malta Exchange. This Writer's Cut edition features fascinating behind-the-scenes commentary read by the author. Critically-acclaimed and award-winning narrator Scott Brick returns to his role as Cotton Malone — eponymous hero of Berry's iconic New York Times bestselling series — as he enters a deadly race for the Vatican's oldest secrets.

The pope is dead. A conclave to select his replacement is about to begin. Cardinals are beginning to arrive at the Vatican, but one has fled Rome for Malta in search of a document that dates back to the 4th century and Constantine the Great.

Former Justice Department operative, Cotton Malone, is at Lake Como, Italy, on the trail of legendary letters between Winston Churchill and Benito Mussolini that disappeared in 1945 and could re-write history. But someone else seems to be after the same letters and, when Malone obtains then loses them, he’s plunged into a hunt that draws the attention of the legendary Knights of Malta.

The knights have existed for over nine hundred years, the only warrior-monks to survive into modern times. Now they are a global humanitarian organization, but within their ranks lurks trouble — the Secreti — an ancient sect intent on affecting the coming papal conclave. With the help of Magellan Billet agent Luke Daniels, Malone races the rogue cardinal, the knights, the Secreti, and the clock to find what has been lost for centuries. The final confrontation culminates behind the walls of the Vatican where the election of the next pope hangs in the balance.

"Scott Brick continues to bolster his status as one of the best narrators of international thrillers with his excellent reading of Berry's latest...Brick easily negotiates his way through this complex plot, his confident delivery keeps the suspense high while bringing a solid reality to a story that often walks a fine line between the believable and the improbable." — Publishers Weekly on The Venetian Betrayal

"Narrator Scott Brick's smooth voice flows with the twists and turns of Berry's political thriller...Secrets unravel, and tensions rise as Brick shifts vocal focus from the historical secret society to contemporary conspirators who include corrupt politicians and judges." — AudioFile Magazine on The Lost Order

STEVE BERRY is the New York Times and #1 internationally bestselling author of fifteen Cotton Malone novels, four stand alones, and several works of short fiction. He has 25 million books in print, translated into 40 languages. With his wife, Elizabeth, he is the founder of History Matters, which is dedicated to historical preservation. He serves as an emeritus member of the Smithsonian Libraries Advisory Board and was a founding member of International Thriller Writers, formerly serving as its co-president.

“The intrigue is intense . . . . Thriller fans will have their violence fix, but the real fun is in learning about the inner workings of the church, its history dating all the way back to Constantine, and the troubled past of Malta . . . . This one will appeal to Dan Brown fans and anyone else in the mood for a page-turning yarn.” —Kirkus Reviews