All Scot and Bothered (Devil You Know #2) (Mass Market) 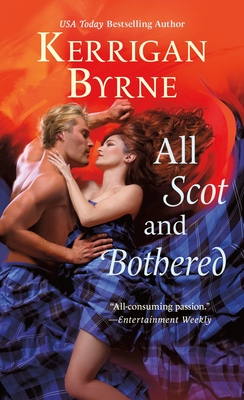 This is book number 2 in the Devil You Know series.

All Scot and Bothered is the second book in the stunning Devil You Know series by USA Today bestselling author Kerrigan Byrne!

They are a dangerous duke, a fierce lord, and an infamous earldark, bold, brave men who know exactly what they want. And there is only one woman who can bring them to their knees...

He is first and foremostat everything. A man whos made his own way through ruthless cunning and sheer force of will. A strong and imposing Scot who can turn on the charm but does not suffer fools. His title: Lord Chief Justice of the High Court. His name: Cassius Gerard Ramsay. His mission: To investigate the goings-on at London's most notorious gaming hell, owned and operated by one of the most intriguing and desirable women hes ever met.

IN THIS GAME OF LOVE, THE RULES DO NOT APPLY

Cecelia Teague was an orphan facing a rather dire futureuntil a secret benefactor from her mothers scandalous past swept into her life. Sent to a prestigious boarding school and later to university, Cecelia believed high society was at her fingertips...Then, from out of nowhere, she became the inheritor of a gambling establishment. Now Cecelia must live two lives: one as a proper lady who finds herself undeniably drawn to Lord Ramsay and the other as a savvy gaming hell owner trying to save her business from the very same man. He has no idea she is both women...and Cecelia would like to keep it that way. But what happens when consuming passion and escalating danger threaten to reveal the truth?

"With the Devil You Know series, Byrne once again delivers the beautifully nuanced characters and seductive storytelling her readers have come to expect."Booklist

"Hot romance and tantalizing intrigue...Readers will be delighted." - Publishers Weekly starred review on All Scot and Bothered

"Will ensnare readers with its soul-searing, richly sensual love story, expertly spiced with just the right dash of dry wit and generous measure of thrilling danger." - Booklist starred review on All Scot and Bothered

"Byrne crafts a smoldering romance that combines an enticing, well-matched couple with an original storyline about the underbelly of Victorian society that keeps the readers guessing." - Library Journal

"[Tantalizes] readers with the couples teasing and building passion." - Publishers Weekly on How To Love A Duke in Ten Days

"...Byrnes writing comes to vivid life on the page, plopping you in the middle of piratical scheming with such verve youll swear you can feel the sea spray on your face. ...Byrne weaves in such undeniable thrills and a sweeping sense of all-consuming passion that you may just end up falling for the story against your better judgment." Entertainment Weekly on The Duke With the Dragon Tattoo

"Another winner in a stellar series." Library Journal starred review on The Duke With the Dragon Tattoo

"Everything about this deliciously dark and dangerous historical romance is done to perfection." Booklist starred review on The Duke With the Dragon Tattoo

"Readers who feel guilty about craving the thrill of a Victorian bodice-ripper will appreciate the moral reassurance of Byrnes sensitive characterizations." Publishers Weekly Starred Review on The Duke with the Dragon Tattoo