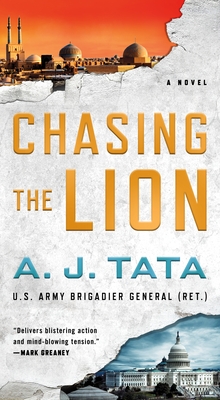 This is book number 1 in the Garrett Sinclair series.

"Readers are going to love Garrett Sinclair, who reads like this generation's Jason Bourne."—Ryan Steck

"If you are looking for a good night’s sleep, leave this one in the nightstand."—Jack Carr

Parizad rose through his nation’s military to become a lethal soldier and brilliant tactical commander. Now a general, he leads Quds Force, an extremist terrorist organization targeting America and its western allies.

The United States has just uncovered a biochemical weapon developed by Parizad’s group. A viral agent, it attacks a person’s nervous system and renders them susceptible to mind control. Parizad plans to unleash the weapon in Washington D. C. on Inauguration Day during the swearing in of the country’s first female president, turning civilians into weapons.

Army Lieutenant General Garrett Sinclair and his Joint Special Operations team are assigned to stop the terrorist strike. Sinclair pursues Parizad across the Middle East, Europe, and in the U.S., only to discover a deeper conspiracy—a revelation that his wife may not have died from cancer but was murdered. Separated from his teammates and unsure of who he can trust, Sinclair is on a mission not only to save his country, but to avenge his family.

A. J. TATA, Brigadier General, U.S. Army (Retired), most recently performed the duties of Under Secretary of Defense for Policy in the Pentagon. He also commanded combat units in the 82nd and 101st Airborne Divisions and the 10th Mountain Division. His last combat tour was in Afghanistan in 2007 where he earned the Combat Action Badge and Bronze Star Medal. He is the author of numerous national bestselling novels, including books from The Captain Jake Mahegan and Threat Series. He was the National Security Expert for One America News Network and a frequent foreign policy guest commentator on Fox News and CNN.

"A rip-roaring, page-turning adventure from beginning to end. Readers are going to love Garrett Sinclair, who reads like this generation's Jason Bourne." —Ryan Steck, The Real Book Spy

"If you are looking for a good night’s sleep, leave this one in the nightstand." —Jack Carr, New York Times bestselling author of Savage Son

"A gripping, white-knuckle ride that will leave the reader looking for cover." —Simon Gervais, former RCMP counterterrorism officer and bestselling author of Hunt Them Down

"General Tony Tata uses his experience to give us a glimpse into the fascinating world of military intrigue with a real human touch." —James O. Born, New York Times bestselling author

"Chasing the Lion is a red hot thriller as timely as tomorrow's headlines." —Stephen Coonts

"Garrett Sinclair is a powerhouse of a hero." —Mark Greaney, #1 New York Times bestselling author of One Minute Out

"Tony Tata has written a white knuckle read that I dare you to put down." —Joel C. Rosenberg, New York Times bestselling author of The Last Jihad and The Jerusalem Assassin

"Full of energy and snapping with action, Chasing the Lion is Tony Tata at his best." —Marc Cameron, New York Times bestselling author

"In addition to providing fully fleshed-out characters, Tata transforms familiar elements, including an Iranian terrorist bent on revenge, a new bioweapon, corrupt public officials in high places, and a hero whose family is in jeopardy, in ways that are exciting and fresh. Military action fans will get their money’s worth." —Publishers Weekly

"[A] hybrid between Lee Child’s “Jack Reacher,” Clint Eastwood’s “Dirty Harry,” and Daniel Silva’s “Gabriel Allon.” ... General A.J. Tata (retired) proves to be a masterful storyteller, and weaves a convoluted, action packed narrative, brimming with authentic action sequences (as only told through the eyes of someone who actually has experienced the raw devastation of war)." —Mystery & Suspense