Under Currents: A Novel (CD-Audio) 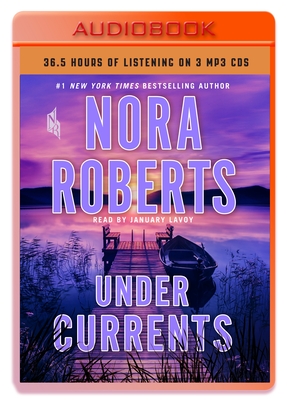 By Nora Roberts, January LaVoy (Read by)
$19.99
Backordered or Out of Print

“I know Nora Roberts is a prolific author with many titles under her belt, but every time I pick up a new one it’s pure magic, and Under Currents was no different. I love how Nora didn’t pull her punches during the hard moments and tough times, but the novel was still beautifully balanced with the sweet romance that developed. Without a doubt, Under Currents is a new Nora Roberts favorite. Whether they are old fans or new, I hope romance readers (and others!) will give this book a try. They won’t be disappointed.”
— Kimberly Huynh, Blue Bunny Books and Toys, Dedham, MA

For both Zane and Darby, their small town roots hold a terrible secret. Now, decades later, they've come together to build a new life. But will the past set them free or pull them under? Find out in Under Currents from #1 New York Times bestselling author Nora Roberts.

Zane Bigelow grew up in a beautiful, perfectly kept house in North Carolina’s Blue Ridge Mountains. Strangers and even Zane’s own aunt across the lake see his parents as a successful surgeon and his stylish wife, making appearances at their children’s ballet recitals and baseball games. Only Zane and his sister know the truth, until one brutal night finally reveals cracks in the facade, and Zane escapes for college without a thought of looking back...

Years later, Zane returns to his hometown determined to reconnect with the place and people that mean so much to him, despite the painful memories. As he resumes life in the colorful town, he meets a gifted landscape artist named Darby, who is on the run from ghosts of her own.

Together they will have to teach each other what it means to face the past, and stand up for the ones they love.

January Lavoie has narrated the Sweet Valley Confidential series for Macmillan Audio, as well as The Snow Angel by Glenn Beck and Dreams of the Dead by Perri O’Shaughnessy.