Hotel of Secrets: A Novel (Paperback) 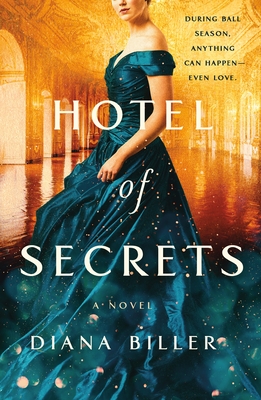 Diana Biller's Hotel of Secrets is chock full of banter-filled shenanigans, must-have-you kisses, and romance certain to light a fire in the hearts of readers everywhere.

During ball season, anything can happen—even love.

It’s ball season in Vienna, and Maria Wallner only wants one thing: to restore her family’s hotel, the Hotel Wallner, to its former glory. She’s not going to let anything get in her way - not her parents’ three-decade-long affair; not seemingly-random attacks by masked assassins; and especially not the broad-shouldered American foreign agent who’s saved her life two times already. No matter how luscious his mouth is.

Eli Whittaker also only wants one thing: to find out who is selling American secret codes across Europe, arrest them, and go home to his sensible life in Washington, DC. He has one lead - a letter the culprit sent from a Viennese hotel. But when he arrives in Vienna, he is immediately swept up into a chaotic whirlwind of balls, spies, waltzes, and beautiful hotelkeepers who seem to constantly find themselves in danger. He disapproves of all of it! But his disapproval is tested as he slowly falls deeper into the chaos - and as his attraction to said hotelkeeper grows.

"With prose to match the sumptuous setting of 1870s Vienna, Hotel of Secrets is an exquisite and decadent read. Diana Biller breathes new life into historical romance with writing that is singularly lush, deeply romantic, and transportive. Readers will get swept away by the combination of nail-biting intrigue and whole-hearted passion." - Rosie Danan, bestselling author of The Roommate

Diana Biller is the author of The Widow of Rose House and The Brightest Star in Paris. When she isn’t writing, she enjoys snuggling her animals, taking “research” trips abroad, and attending ballet class. She lives with her husband in Los Angeles.

Praise for Hotel of Secrets:

"Biller transports readers to sparkling 19th century Vienna for a unique and wonderful tale of intrigue and espionage. Historical romance readers - especially those looking for a break from Regency England - will be dazzled." - Publishers Weekly, Starred Review

"Glittering and golden, Diana Biller's Hotel of Secrets serves up decadence, intrigue, and a deeply emotional love story. Biller excels at immersive and atmospheric storytelling, and compelling voices with heart and just the right touch of humour. At once tender and exciting, Hotel of Secrets demonstrates why Diana Biller continues to be one of historical romance's very best." - Ruby Barrett, author of Hot Copy

"Gorgeously written and deeply romantic, Hotel of Secrets has a dream pairing: a buttoned-up virgin hero and a delightful, capable heroine falling for each other amid political intrigue and family drama... while I couldn’t wait for Eli and Maria’s slow burn to ignite, I didn’t want it to end. It’s another wonderful romance from Diana Biller." - Emma Barry, author of Earth Bound and Chick Magnet

"With prose to match the sumptuous setting of 1870s Vienna, Hotel of Secrets is an exquisite and decadent read. Diana Biller breathes new life into historical romance with writing that is singularly lush, deeply romantic, and transportive. Readers will get swept away by the combination of nail-biting intrigue and whole-hearted passion." - Rosie Danan, bestselling author of The Roommate

"Wit and charm illuminate this marvellous novel. Hotel of Secrets is dazzling. It will carry you through its pages as if in a glorious, heart-stirring dance, making you laugh, and spin, and come away feeling exhilarated. A delightful must-read for lovers of historical romance." - India Holton, bestselling author of The Wisteria Society of Lady Scoundrels

"Diana Biller’s lavishly imagined Hotel of Secrets sparkles with champagne bubbles and winter moonlight. This unforgettable, intoxicatingly romantic tale of tangled family history and political intrigue will leave readers spellbound and breathless and ready to begin again. Written with originality, wit, and style, every page is pure magic." - Joanna Lowell, author of The Runaway Duchess and The Duke Undone

"A beautifully researched and emotionally complex experience, Hotel of Secrets is an opulent slice of Viennese tradition as rich as a torte and as layered as a complicated line of Strauss. With intrigue and danger that nips on the heels of its luscious waltz, Biller’s lush and atmospheric escape is dolloped with romance and the deep, complicated and sigh-worthy characters that always shoot her to the top of my auto-buy list." - Rachel McMillan, author of The Mozart Code

Praise for The Brightest Star in Paris:

"In the gorgeously written The Brightest Star in Paris, Biller provides a fascinating view into the psychological makeup of two haunted lovers... A stunning novel of tender emotions amid harsh circumstances." - BookPage, starred review

“Readers will be moved by the story and its handling of grief as well as its magical second-chance romance.” - BookBub

"Diana Biller is a breath of fresh air in the historical romance genre. I can’t wait to see what more she has up her talented sleeves." - The Infinite Limits of Love

"This was such a poignant, emotional, second-chance romance... I am so looking forward to whatever journey this author takes her readers on next." - Smexy Books

Praise for The Widow of Rose House:

"A chemistry-fueled debut with a bit of a ghost story, great for readers of gothic romance." - Booklist

"The Widow of Rose House is close to perfection and any lover of historical romance will adore this debut." - Smart Bitches, Trashy Books

"A ghost-hunting adventure and sweeping romance in equal parts, and peppered with moments of breath-holding tension, it amazes me that this Gilded Age gem of a story is a debut effort. It’s a moving, evocative, beautifully told and, at times, chilling read, and even when I desperately wanted to speed ahead to find out what happens in the end, I made myself savour every exquisite last word of it." - Natasha is a Book Junkie

"Utterly irresistible. With engaging, original characters and dialogue as crisp as a new apple, Diana Biller’s debut will have you rooting for Alva and Sam through every spooky twist." - Deanna Raybourn, New York Times bestselling author of the Veronica Speedwell series