Not That Kind of Ever After: A Novel (Paperback) 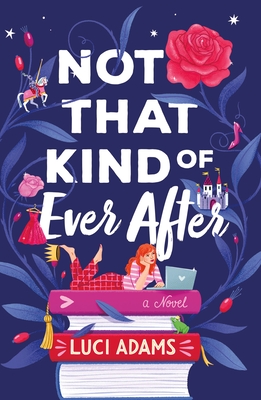 Fairytale meets feminism in Luci Adams's Not That Kind of Ever After, a frothy adventure of one woman’s journey to claim happily ever after in times of serial dating, swiping right, and the quest to find your soulmate.

Bella Marble’s life isn’t what she imagined. Instead of an author, she’s receptionist at a small press. Instead of happily married, she’s single, and her lovey-dovey parents are divorcing. And to top it off, her best friend of twenty-nine years, Ellie Mathews, is moving out and marrying the heinously boring Mark. (He’s not worthy of her. No one could be). Bella feels rudderless, only slightly soothed by time spent with Ellie’s (not hot) brother, (he’s not hot) Marty (okay, he’s hot. But he’s also the aggravating brother she never had—right)?

When Marty recommends Bella stop looking for “the one” and just have fun, Bella finds a new, empowered side of herself. But when she posts a fairy-tale retelling of a disastrous one night stand on a storytelling app, all of a sudden, Bella has become @B.Enchanted. And she’s gone viral.

Now, Bella’s in a fight with Ellie, her new roommates are so, deeply, weird, and the pressure is mounting to find new fairy tales to write about—but she’s got to live them first.

“As side splittingly hilarious as it is empowering and emotional, Not That Kind of Ever After is a sparkling debut.”--Helena Hunting, bestselling author

Luci Adams (she/her) started out working in tax before moving into copywriting, creating social posts for Apple Music, and assisting with Amazon and BBC productions at Working Title Television. She now works as a senior analyst at The Guardian by day and writes uproariously funny and inventive rom coms by night. Not That Kind of Ever After is her debut novel.

"A sweet and slow-burn love story, showcasing in-depth knowledge of romantic comedies and featuring a supporting cast worthy of their own novels." - Library Journal

"I adored this book from its reverse-cowgirl start to its swoon-worthy ending. In a single read, I devoured Luci’s wickedly funny exploration of finding one’s own Happily Ever After, cackling through Bella’s messy, sex-filled quests to satisfy both her personal and her professional life. The backbone of this hilarious romp is an honest female friendship that will tug at your heartstrings. If you’ve ever gone searching for The Fairytale within the hellscape of modern dating, Not That Kind of Ever After is for you." -Alison Rose Greenberg, author of Bad Luck Bridesmaid

“As side splittingly hilarious as it is empowering and emotional, Not That Kind of Ever After is a sparkling debut.” - Helena Hunting, bestselling author

"As much a story of self-discovery as a romance, Bella remains a heroine to root for throughout. This is a charmer." - PW