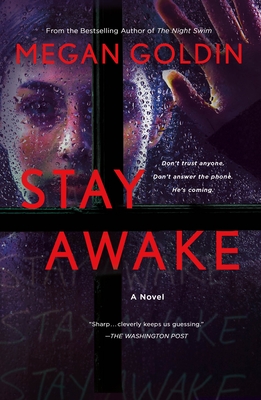 Liv Reese wakes up in the back of a taxi with no idea where she is or how she got there. When she’s dropped off at the door of her brownstone, a stranger answers—a stranger who claims to live in her apartment. She reaches for her phone to call for help, only to discover it’s missing. In its place is a bloodstained knife. Her hands are covered in scribbled messages, like graffiti on her skin: STAY AWAKE.

Two years ago, Liv was thriving as a successful writer for a trendy magazine. Now, she’s lost and disoriented in a New York City that looks nothing like what she remembers. Catching a glimpse of the local news, she’s horrified to see reports of a crime scene where the victim’s blood has been used to scrawl a message across a window, similar to the message that’s inked on her hands. What did she do last night? And why does she remember nothing from the past two years? Liv finds herself on the run for a crime she doesn’t remember committing. But there’s someone who does know exactly what she did, and they’ll do anything to make her forget—permanently.

A complex thriller that unfolds at a breakneck speed, Stay Awake will keep you up all night.

MEGAN GOLDIN, author of THE ESCAPE ROOM and THE NIGHT SWIM, worked as a correspondent for Reuters and other media outlets where she covered war, peace, international terrorism and financial meltdowns in the Middle East and Asia. She is now based in Melbourne, Australia where she raises three sons and is a foster mum to Labrador puppies learning to be guide dogs.

Praise for The Night Swim:

“A blistering plot and crisp writing make The Night Swim an unputdownable read.” –Sarah Pekkanen, bestselling author of The Wife Between Us

Praise for The Escape Room: