Emma in the Night: A Novel (Paperback) 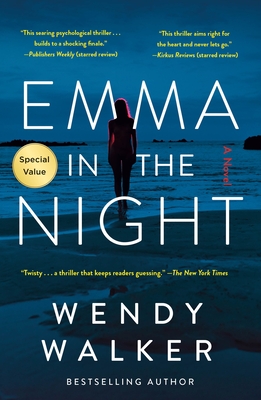 “Suspense novelist Wendy Walker is back with an enthralling tale of lies and intrigue. What really happened the night that two sisters went missing? After three years, younger sister Cass returns with a troubling tale of abduction, and the hunt begins for the still-missing Emma. Told in the alternating voices of the teenage Cass and a forensic psychologist with her own emotional baggage, Emma in the Night is the ultimate unreliable narrator experience. This story will grip readers from page one, up until an ending so shocking it will knock you sideways. Trust no one.”
— Pamela Klinger-Horn, Excelsior Bay Books, Excelsior, MN

From the bestselling author of All Is Not Forgotten, a thriller about two missing sisters, a twisted family, and what happens when one girl comes back...

One night three years ago, the Tanner sisters disappeared: fifteen-year-old Cass and seventeen-year-old Emma. Three years later, Cass returns, without her sister Emma. Her story is one of kidnapping and betrayal, of a mysterious island where the two were held. But to forensic psychiatrist Dr. Abby Winter, something doesn't add up. Looking deep within this dysfunctional family Dr. Winter uncovers a life where boundaries were violated and a narcissistic parent held sway. And where one sister's return might just be the beginning of the crime.

WENDY WALKER is the author of the psychological suspense novels All is Not Forgotten, Emma In The Night,The Night Before, and Don't Look For Me. Her novels have been translated into 23 foreign languages and have topped bestseller lists both nationally and abroad. They have been featured on The Today Show, The Reese Witherspoon Book Club, and The Book of the Month Club and have been optioned for television and film. Prior to her writing career, Wendy practiced both corporate and family law, having earned her J.D. from Georgetown University Law Center and her undergraduate degree from Brown University. Wendy also worked as a financial analyst at Goldman, Sachs & Co. Wendy is currently finishing her next thriller and managing a busy household in Connecticut.

Praise for Emma in the Night:

"In this searing psychological thriller...Walker's portrayal of the ways in which a narcissistic, self-involved mother can affect her children deepens the plot as it builds to a shocking finale." —Publishers Weekly, Starred Review

"A tense thriller explores the bond between sisters and family dynamics that give new meaning to the term 'dysfunctional'...This thriller aims right for the heart and never lets go." —Kirkus, Starred Review