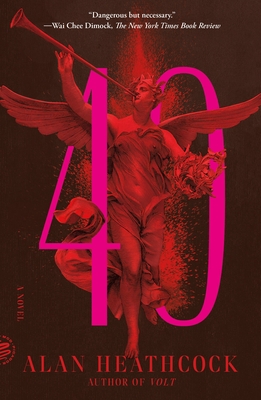 From the award-winning author Alan Heathcock comes an American myth of the future: a vision of civil war, spectacle, and disaster of biblical proportions.

In a future America ravaged by natural disaster, pandemic, and political unrest, a fundamentalist faction emerges. As the Novae Terrae gain power, enticing civilians with bread and circuses, a civil war breaks out between its members and the U.S. government.

Mazzy Goodwin, a young soldier, wants only to find her little sister, Ava Lynn. One day, she wakes in a bomb crater to find wings have sprouted from her back. Has she died? Been given wings by God? Undergone a military experiment?

The world sees a miracle. Mazzy is coaxed into seeing it as an opportunity: to become the angel-like figurehead of the revolution in return for being reunited with her sister. Her journey leads her to New Los Angeles, where the Novae have set up the headquarters for their propaganda machine—right in the ruins of Hollywood. Aided by friends old and new, she must navigate a web of deceit while staying true to herself.

Told in sharp, haunting prose as cinematic as it is precise, Alan Heathcock’s 40 is a dizzyingly fantastical novel about the dangers of blind faith, the temptation of spectacle, and the love of family. In a tale by turns mythic and tragic, one heroine must come to terms with the consequences of her decisions and face the challenges of building a new world.

Alan Heathcock has won a Whiting Award and a National Magazine Award, and has received fellowships from the National Endowment for the Arts, the Sewanee Writers’ Conference, the Bread Loaf Writers’ Conference, the Lannan Foundation, and the Idaho Commission on the Arts. His story collection Volt was selected as a best book of the year by numerous newspapers and magazines, including GQ, Publishers Weekly, Salon, and the Chicago Tribune; was named a New York Times Editors’ Choice; and was a finalist for the Barnes & Noble Discover Award.

“Shaped from foreboding, almost neobiblical prose, 40 is a fast-paced vision of a shattered American future: a place of violent factions, barbaric pageantry, remote-control rain, and angels made real. Alan Heathcock has created a speculative thriller that glitters with imagination and glows with heart.”
—Anthony Doerr, author of Cloud Cuckoo Land

“With 40, Alan Heathcock has come blazing into the novel form, giving us an original mythos, a tour de force of metamorphosis and survival. If an angry Flannery O’Connor wrote postapocalyptic fiction with a pen of fire, it might look something like this.”
—Rebecca Makkai, author of The Great Believers

“Forged amid the ashes and blood of climate catastrophe, 40 invokes a genre-busting Wild West where faith and war and family converge with razor-sharp prose, volleying to become a compass for an uncertain future. These words will cut deep into your soul and fill it with angelic feathers and the detritus of a dying world—often beautiful and horrific at once. You can try to corral 40 at a roundtable of Paolo Bacigalupi, Angela Carter, and Cormac McCarthy, but this near-future prophecy is chiefly Heathcockian.”
—Sequoia Nagamatsu, author of How High We Go in the Dark