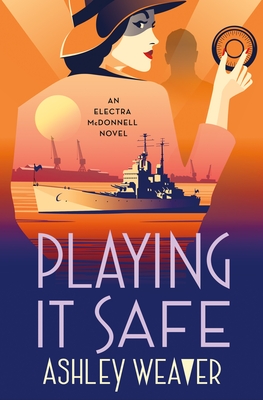 This is book number 3 in the Electra McDonnell Series series.

The third in the Electra McDonnell series from Edgar-nominated author Ashley Weaver, Playing It Safe is a delightful World War II mystery filled with spies, murder, romance, and wit.

As the Blitz continues to ravage London, Ellie McDonnell—formerly a safecracking thief, but currently determined to stay on the straight and narrow to help her country—is approached by British Intelligence officer Major Ramsey with a new assignment. She is to travel under an assumed identity to the port city of Sunderland and there await further instructions. In his usual infuriating way, the Major has left her task as vague and mysterious as possible.

Ellie, ever-ready to aid her country, heads north, her safecracking tools in tow. But before she can rendezvous with the major, she witnesses an unnatural death. A man falls dead in the street in front of her, with a note clutched in his hand. Ellie’s instincts tell her that the man’s death is connected in some way to her mission.

Soon, Ellie and the major are locked in a battle of wits and a race against time with an unknown and deadly adversary, and a case that leads them to a possible Nazi counterfeiting operation. With bombs dropping on the city and a would-be assassin shadowing their every move, it will take all of Ellie’s resourcefulness and Major Ramsey’s fortitude to unmask the spymaster and avert disastrous consequences—for England and for their own lives.

Praise for the Electra McDonnell series:

"A thorny relationship between Ellie and Ramsey, a cast of colorful characters, a brisk pace, and an ironic message about the identity of true patriots enthrall."—Publishers Weekly (Starred) on A Peculiar Combination

“Ellie is wonderfully resourceful and divinely funny. Let’s hope this expertise-and-romance-filled series continues for a very long time.”—Booklist (Starred) on The Key to Deceit

"Competing romances, slippery spies, and the horrors of the Blitz combined in an exciting mystery/adventure.”—Kirkus Reviews on The Key to Deceit

"An exciting yarn filled with narrow escapes, revised strategies and a snapshot of London in August 1940, a month before the Blitz began."—Fredericksburg Free Lance-Star on A Peculiar Combination

"A cracking good mystery! Ellie is a smart and gutsy new heroine, and takes them on an adventure filled with clever twists, flourishes of romance, and her signature sparkling wit."—Anna Lee Huber, bestselling author of the Lady Darby Mysteries

"Filled with wry humor, tight suspense, a delightful cast of characters, and a bit of budding romance."—Alyssa Maxwell, author of The Gilded Newport Mysteries and A Lady's Maid Mysteries