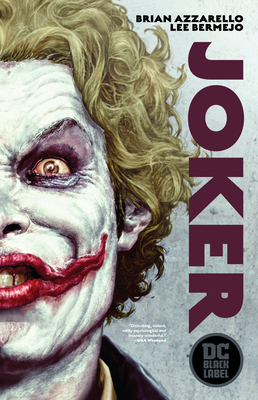 The Joker has been mysteriously released from Arkham Asylum, and he's none too happy about what's happened to his Gotham City rackets while he's been "away." Brian Azzarello and Lee Bermejo bring you arguably the most terrifying Joker tale ever written!

He will stand over your body, with your blood on his hands, and I promise you he will laugh. Not because your life means nothing to him. But because death, for him, is the punch line.

The Joker has been mysteriously released from Arkham Asylum, and he's none too happy about what's happened to his Gotham City rackets while he's been away. What follows is a harrowing night of revenge, murder and manic crime as only The Joker can deliver it, as he brutally takes back his stolen assets from the Penguin, the Riddler, Two-Face, Killer Croc and more.

Brian Azzarello has been writing comics professionally since the mid-1990s. He is the author of Jonny Double, Batman: Broken City, and the Harvey and Eisner Award-winning 100 Bullets, all created in collaboration with artist Eduardo Risso. Azzarello’s other work for DC includes Hellblazer and Loveless with Marcelo Frusin; Dark Knight III: The Master Race with Frank Miller, Andy Kubert, and Klaus Janson; Superman: For Tomorrow with Jim Lee; Joker and Luthor with Lee Bermejo; Sgt. Rock: Between Hell and A Hard Place with Joe Kubert; Filthy Rich with Victor Santos; and most recently the all-new ongoing series Wonder Woman with Cliff Chiang.

Lee Bermejo began drawing comics in 1997 for WildStorm Studios in San Diego at age 19. He collaborated with acclaimed writer Brian Azzarello on the graphic novels Joker and Luthor, and worked with writer John Arcudi on the Superman feature in Wednesday Comics. He has also worked on Hellblazer with Mike Carey and Global Frequency with Warren Ellis. Bermejo has illustrated the covers to the line of Vertigo Crime graphic novels, beginning with Filthy Rich, written by Brian Azzarello, and Dark Entries, written by Ian Rankin. Bermejo has lived in Italy since 2003.

"The story has it all: flawed protagonists, dirty cops, conspiracy, guns and that big mistake that makes it all go wrong." —Chicago Tribune

"A meditation on money, power and morality ... for our money, the  best current ongoing series." —Playboy

"If you liked The Dark Knight, Joker is a must-have for your bookshelf." —MTV.com

"A deeply disturbing and completely unnerving work, a literary achievement that takes its place right alongside Alan Moore's The Killing Joke." —IGN