The Greatest Knight: The Unsung Story of the Queen's Champion (William Marshal) (Paperback) 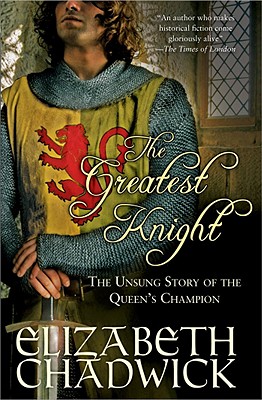 By Elizabeth Chadwick
$20.99
Backordered or Out of Print

12th century, England: A penniless young knight with few prospects, William Marshal is plucked from obscurity when he saves the life of Henry II's formidable queen, Eleanor of Aquitaine. In gratitude, she appoints him tutor to the heir to the throne, the volatile and fickle Prince Henry. But being a royal favorite brings its share of danger and jealousy as well as fame and reward.

A writer of uncommon historical integrity and accuracy, Elizabeth Chadwick resurrects the true story of one of England's greatest forgotten heroes in a captivating blend of fact and fiction. The Greatest Knight restores William Marshal to his rightful place at the pinnacle of the British Middle Ages, reflecting through him the triumphs, scandals, and power struggles that haven't changed in eight hundred years.

Fans of Phillipa Gregory, Susanna Kearsley, or Diana Gabaldon are sure to recognize The Greatest Knight as exceptional historical fiction, bringing medieval Britain to brilliant life.

More Novels of Elizabeth Chadwick's William Marshal:
The Greatest Knight
The Scarlet Lion
For the King's Favor
Templar Silks
To Defy a King

Elizabeth Chadwick lives near Nottingham with her husband and two sons. She is the author of 17 historical novels, including Lords of the White Castle, Shadows and Strongholds, A Place Beyond Courage, The Scarlet Lion, The Winter Mantle, and The Falcons of Montebard, four of which have been shortlisted for the Romantic Novelists' Awards.