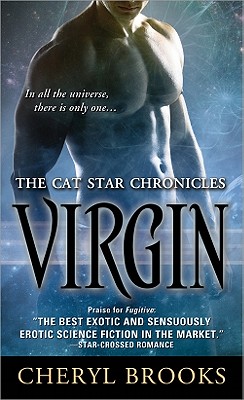 By Cheryl Brooks
Email or call for price.
Special Order

This is book number 7 in the Cat Star Chronicles series.

He's Never Met Anyone Who Made Him Purr...And He'll Never Give His Body Without Giving His Heart

Dax is happy to take Ava back to her home planet, until he finds out she's returning to an old boyfriend.

As their journey together turns into a quest neither expected, Ava would give herself to Dax in a heartbeat. Except he doesn't know the first thing about seducing a woman.

Praise for the Cat Star Chronicles:
"Sexy and fascinating... leaves the reader eager for the next story featuring these captivating aliens." -Romantic Times
"Ms. Brooks has a way of carrying the reader off into the stars... I highly recommend this entire series...it is action packed adventure that will draw the reader in and keep them turning the pages." -The Romance Studio
"A series that has thoroughly captivated me." -Romance Junkies

Cheryl Brooks is a critical care nurse by night and a romance writer by day. She is a member of the Romance Writers of America. She is the author of The Cat Star Chronicles series and lives with her husband, two sons, five cats, five horses, and one dog in Indiana.