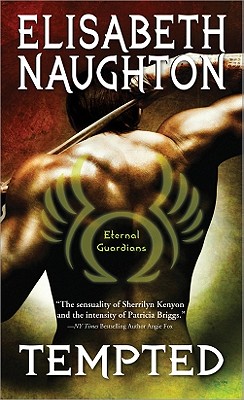 By Elisabeth Naughton
Email or call for price.
Special Order

Demitrius has done all he could to protect Isadora, his soul mate, from himself. But when she is kidnapped, he'll stop at nothing to get her back--even opening his broken heart in order to save them both.

DEMETRIUS--He's the hulking, brooding warrior even his fellow Guardians avoid. Too dark. Too damaged. And given his heritage, he knows it's best to keep everyone at arm's length.

Isadora is missing. The words pound through his head like a frantic drumbeat. For her own protection, Demetrius did all he could to avoid the fragile princess, his soul mate. And now she's gone--kidnapped. To get her back, he'll have to go to the black place in his soul he's always shunned.

As daemons ravage the human realm and his loyalty to the Guardians is put to the ultimate test, Demetrius realizes that Isadora is stronger than anyone thought.

And finally letting her into his heart may be the only way to save them both.

"An incredibly fresh spin on Greek mythology that is full of humor, action, passion, and a storyline that keeps you from putting down the book." --Fresh Fiction on Marked

A former junior high science teacher, Elisabeth Naughton traded in her red pen and test-tube set for a laptop and research books. She now writes sexy romantic adventure and paranormal novels full-time from her home in western Oregon, where she lives with her husband and three children. Her work has been nominated for numerous awards, including the prestigious RITA Awards of Romance Writers of America, the Australian Romance Reader Awards, the Golden Leaf, and the Golden Heart. When not writing, Elisabeth can be found running, hanging out at the ball park, or dreaming up new and exciting adventures. Visit her at www.elisabethnaughton.com to learn more about her and her books.