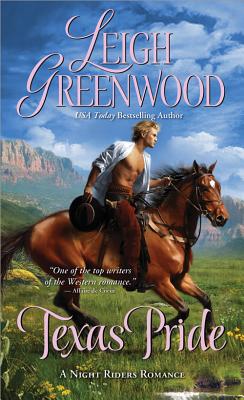 By Leigh Greenwood
Email or call for price.
Special Order

"Leigh Greenwood... has written another powerful, yet poignant saga in his Night Rider series... saddle up and read on "--Fresh Fiction

When Carla Reece's brother loses his half of their ranch in a high-stakes game of poker she's less than pleased. Especially when the blond giant that swaggers up to her door makes her madder than wet hen and weak in the knees all at the same time.

Carla had never met anyone more infuriating in her life. No matter how stupid her brother had been for gambling away his stake of the ranch, his usurper had no right to take over her land. But her new foreman claimed to be some foreign royalty and promised to leave after a year. Still, a year was way too long to spend with such an exasperating man.

Ivan may have charmed everyone in town into thinking he was the perfect gentleman, but Carla knew better. There had to be a chink in his armor--a red hot-passion under that calm, cool gaze. But once she finds it, she may be in for more than she ever bargained for.

What readers are saying about Texas Pride

..".everything I enjoy in an historical romance novel: strong, realistic characters, love, humor, mystery -all that keeps my attention to the very last paragraph."

What reviewers are saying about Heart of a Texan

"Greenwood has created a story filled with action, adventure, and a wily, larger than life, villain who ends up bringing two opposites together who turn out to be just perfect for each other."--Night Owl Reviews

"Leigh Greenwood, a renowned writer of western romances and USA Bestselling author, has written another powerful, yet poignant saga in his Night Rider series... saddle up and read on "--Fresh Fiction

"Greenwood keeps your interest and makes you care about his characters."--Long and Short Reviews

" Greenwood] writes a Texas romance like he's been there and lived it himself. His settings are vividly described, his characters drawn so effectively you're hooked after the first chapter and his story lines can keep you turning pages late into the night."

"You can't beat an historical Texas romance by Leigh Greenwood. He writes of Texas like no other author." -The Good, The Bad, and the Unread.

"If it's a Greenwood cowboy story, readers are guaranteed an emotional, rich, adventurous romance with strong heroes and courageous heroines"--RT Book Reviews