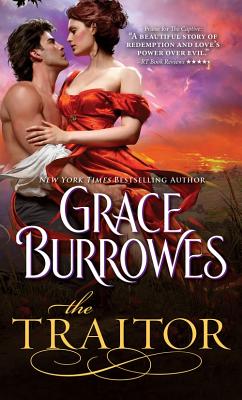 By Grace Burrowes
$7.99
Backordered or Out of Print

This is book number 2 in the Captive Hearts series.

The past will overtake him…

Abandoned in France since boyhood, despite being heir to an English barony, Sebastian St. Clair makes impossible choices to survive a tour of duty in the French Army. He returns to England hoping for the peaceful life of a country gentleman, though old enemies insist on challenging him on the field of honor, one after another.

But this time, he will not fight alone…

Millicent Danforth desperately needs her position as companion to the Traitor Baron's aunt, but grieves to learn that Sebastian must continually fight a war long over. As Sebastian and Milly explore their growing passion, they uncover a plot that will cost Sebastian his life and his honor, unless he does battle once more—this time in the name of love.

New York Times and USA Today bestselling author Grace Burrowes’ bestsellers include The Heir, The Soldier, Lady Maggie’s Secret Scandal, Lady Sophie's Christmas Wish and Lady Eve's Indiscretion. Her Regency romances and Scotland-set Victorian romances have received extensive praise, including starred reviews from Publishers Weekly and Booklist. The Heir was a Publishers Weekly Best Book of 2010, The Best Spring Romance of 2011, Lady Sophie’s Christmas Wish and Once Upon a Tartan have both won RT Reviewers’ Choice Awards, Lady Louisa’s Christmas Knight was a Library Journal Best Book of 2012, The Bridegroom Wore Plaid was a PW Best Book of 2012. Two of her MacGregor heroes have won KISS awards. Grace is a practicing family law attorney and lives in rural Maryland.

"Picking up where The Captive ended, Burrowes continues her examination of imprisonment and the wounds of war from unexpected and intriguing angles...subtle, cozy, thoughtful, and gently paced, this is a satisfying read that easily handles a difficult character and avoids any whiff of the middle-book blahs. " — Publishers Weekly

"Burrowes continues the Captive Hearts series with an unusual twist: The villain of the previous book is now the hero. It takes a skilled storyteller to turn a ruthless interrogator into a man worthy of readers’ respect and adoration. She accomplishes this with compassion, talent, depth of emotion and appealing secondary characters, as well as an unconventional heroine. Burrowes steps outside the box and readers are gifted with a memorable love story." — RT Book Reviews

"Romances about reformed men, such as Lisa Kleypas’ Devil in Winter (2006), are as memorable as they are enjoyable, and Burrowes’ The Traitor is exceptional." — Booklist