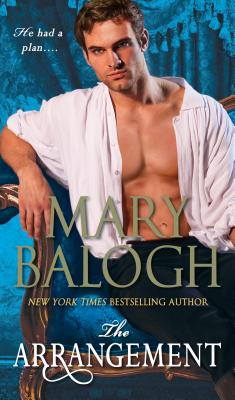 By Mary Balogh
Email or call for price.
Out of Print

"NEW YORK TIMES" BESTSELLER
"A mesmerizing story of passionate awakening and redemption, Mary Balogh's new novel unites a war hero consigned to darkness with a remarkable woman who finds her own salvation by showing him the light of love.
"
Desperate to escape his mother's matchmaking, Vincent Hunt, Viscount Darleigh, flees to a remote country village. But even there, another marital trap is sprung. So when Miss Sophia Fry's intervention on his behalf finds her unceremoniously booted from her guardian's home, Vincent is compelled to act. He may have been blinded in battle, but he can see a solution to both their problems: marriage.
At first, quiet, unassuming Sophia rejects Vincent's proposal. But when such a gloriously handsome man persuades her that he needs a wife of his own choosing as much as she needs protection from destitution, she agrees. Her alternative is too dreadful to contemplate. But how can an all-consuming fire burn from such a cold arrangement? As friendship and camaraderie lead to sweet seduction and erotic pleasure, dare they believe a bargain born of desperation might lead them both to a love destined to be?
Praise for "The Arrangement"
" "
"Balogh understands not only the era, with all its nuances, but also] knows her characters so thoroughly that readers are swept into her stories. There's a natural reserve--a calmness and quiet in her prose--that allows the tenderness of the romance to tug at the reader's heart. This is a beautifully rendered marriage-of-convenience love story that will win a place on keeper shelves."--"RT Book Reviews "(4-1/2 stars)
"This sexy, touching book revisits the marriage-of-convenience plot, joining two heroic, conflicted characters who are navigating their own versions of darkness and delivering them to the redemptive power of love. Regency best-seller Balogh once again takes a standard romance trope and imbues it with heart, emotional intelligence and flawless authenticity."--"Kirkus Reviews "(starred review)
"This touching, totally enthralling story overflows with subtle humor, brilliant dialog, breathtaking sensuality, and supporting characters you want to know better."--"Library Journal "(starred review)
"Balogh can always be depended on to deliver a beautifully written Regency romance with appealing, unusual characters, and the second in her new Survivors' Club series (after "The Proposal") is no exception. . . . Future series installments promise more compellingly tormented heroes."--"Publishers Weekly"
" "
" A] poignant and thoughtful romance."--"Booklist"
" "
"A compassionate love story with a unique hero and heroine . . . The dialogue is snappy, and the climax . . . is exciting and helps bring about the blissful ending. . . . "The Arrangement " is] a must read."--"Fresh Fiction"

Mary Balogh is the "New York Times" bestselling author of numerous books, including the acclaimed Slightly and Simply novels, the Mistress trilogy, and the five titles in her Huxtable series: "First Comes Marriage, Then Comes Seduction, At Last Comes Love, Seducing an Angel, " and "A Secret Affair." A former teacher, she grew up in Wales and now lives in Canada.