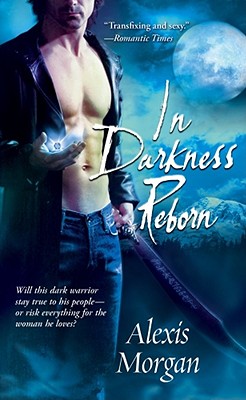 By Alexis Morgan
$9.99
Backordered or Out of Print

Alexis Morgan continues her red-hot paranormal series with a mysterious warrior and his forbidden love for a woman who's allegiance lies with his sworn enemy. . . .

Once a warrior for the Others, Barak q'Young is caught between two worlds -- exiled from his homeland, and a pariah among his enemies, the Paladins. While hunting a betrayer who's selling the precious blue gems that light the Others' world, Barak must aid geologist Lacey Sebastian in her research for the Paladins. Barak is instantly drawn to the fiery, beautiful woman, but Lacey initially despises the enemy intruder. Soon she sees beyond his violent past, though, finding the dark warrior intriguing -- and extremely sexy.

Though neither can resist the passion that blazes between them, Barak is torn between loyalties, hiding a secret gift that could prove useful to Lacey's research, at the sacrifice of his own people. But when Lacey is kidnapped and held hostage, Barak realizes he will do anything to save her . . . even risk his own life.

Alexis Morgan has always been an avid reader, and she loves spending her days with hunky heroes and gutsy heroines. She’s published more than forty books, novellas, and short stories, including contemporary romances, American West historicals, and paranormal romances. She has been nominated for numerous industry awards, including the RITA© from the Romance Writers of America, the top award in the romance genre.