You Will Pay (Mass Market) 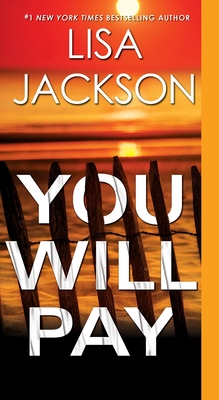 IT’S TOO LATE
It starts as a prank. Among the teen counselors at Camp Horseshoe, tensions and hormones are running high. It’ll be fun to scare Monica O’Neal a little—or a lot. What could go wrong? Everything.

TO BE
Twenty years later, Detective Lucas Dalton is investigating the discovery of human remains at what used to be Camp Horseshoe. Lucas worked there that infamous summer when two girls went missing, rumored to have been kidnapped—or worse. Now seven former female counselors are coming back to the small Oregon town. Each one knows something about that night. Each promised not to tell.

FORGIVEN
Among them is Bernadette Warden, the woman Lucas has never forgotten. As they reunite, a new horror unfolds. First comes a simple, terrifying message: YOU WILL PAY. Then, the murders begin—as a web of lust, greed, and betrayal is untangled to reveal a killer waiting to take the perfect revenge . . .

LISA JACKSON is the #1 New York Times bestselling author of more than seventy-five novels, including After She’s Gone, Close to Home, Tell Me, Deserves to Die, You Don’t Want to Know, Running Scared, and Shiver. She has over thirty million copies of her books in print in nineteen languages. She lives with her family and three rambunctious dogs in the Pacific Northwest. Readers can visit her website at www.lisajackson.com and find her on Facebook.