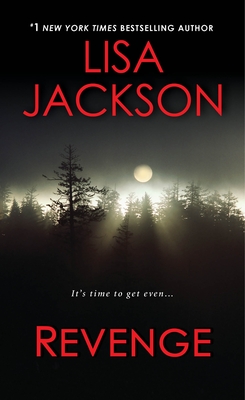 By Lisa Jackson
$7.99
Backordered or Out of Print

In the early 1990s, I visited eastern Oregon for the first time. Inspired by its breathtaking scenery, I wrote Love Letters, a trilogy about a town called Rimrock--whose secrets come to light when the patriarch of its wealthiest family is murdered. Now here it is, collected in one volume, with a new cover, and a new title, Revenge!

Over the years, Jonah McKee acquired vast wealth, power, and an unsavory reputation. Though his fatal car crash is ruled accidental, his widow is convinced otherwise and begs her children to find the truth.

Eldest son Max knew his late father could be manipulative, but a letter found among Jonah's possessions shows just how many lives were subject to his meddling. That list includes Max's brother, Jenner--rodeo rider and rebel--who is confronted by a confession that changes his life. But even while the siblings reel from new revelations, stubborn, beautiful Casey McKee is kidnapped by an enemy who hates the family enough to destroy them, one by one…

If you've enjoyed my earlier novels like Unspoken, Running Scared, and Whispers, then I believe you're going to love reading Revenge!

LISA JACKSON is the #1 New York Times bestselling author of over ninety-five novels, including You Will Pay, After She’s Gone, Deserves to Die, You Don’t Want to Know, Running Scared, and Shiver. She is also the co-author of the Colony Series, written with her sister and bestselling author Nancy Bush, as well as the collaborative novels Sinister and Ominous, written with Nancy Bush and Rosalind Noonan. There are over thirty million copies of her novels in print and her writing has been translated into nineteen languages. She lives with her family and three rambunctious dogs in the Pacific Northwest. Readers can visit her website at www.lisajackson.com and find her on Facebook.