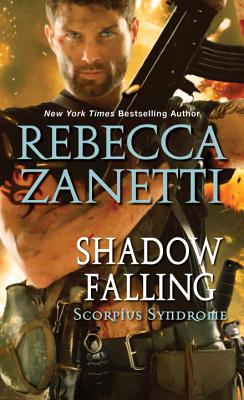 By Rebecca Zanetti
$7.99
Email or call for price

This is book number 2 in the The Scorpius Syndrome series.

Before the Scorpius Syndrome tore through North America and nearly wiped out the population, Vivienne Wellington was the FBI’s best profiler. The bacteria got her anyway. But she survived. She recovered. And when she woke up from a drug-nightmare of captivity, her trust in her fellow man had gone from shaky at best to nonexistent. Her mysterious rescuer wants to convince her he’s the exception. But no matter how tempting he is, with his angel’s eyes and devil’s tongue, Vinnie knows she shouldn’t trust him.

If the FBI were still around they would rate Raze Shadow as one of the bad guys. His military training can’t wipe out his association with the Mercenaries, the most feared gang in a thousand miles. His loyalties are compromised. He won’t even tell Vinnie his real name. But there’s no FBI in the new America of fear and firepower, only instinct and risk. And the way his arms wrap around her tells its own story. Whatever else Raze is concealing, he can’t hide his desire . . .

Rebecca Zanetti is the New York Times  and USA Today bestselling author of over forty romantic suspense, dark paranormal, and contemporary romances, many of which have also appeared on the Amazon, Barnes and Noble, and iBooks bestseller lists. She is a two-time RT Reviewers Choice Award winner, the recipient of the RWA Daphne du Maurier Award, a ﬁve-time Daphne du Maurier Award ﬁnalist, a PRISM Award winner, and a two-time PRISM Award ﬁnalist. Nearly a dozen of her novels have been selected as Amazon Best Romances of the Month, including Lethal Lies and Mercury Striking, which were also Amazon Best Books of the Year. Zanetti has worked as an art curator, Senate aide, lawyer, college professor, and a hearing examiner—only to culminate it all in stories about alpha males and the women who claim them. Please visit her online at RebeccaZanetti.com.