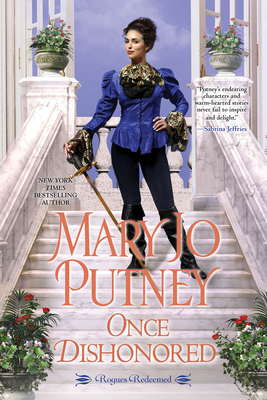 This is book number 5 in the Rogues Redeemed series.

Sparks fly in the page-turning new read from mistress of the Regency genre and historical romance legend, Mary Jo Putney. Will a disgraced former soldier and a beautiful brazen woman determined to regain custody of her son from her devious former husband make the perfect match…even as they are shunned by the London ton?

“Enthralling…Putney again proves why she’s a star of the genre.”
—Publishers Weekly

London, 1816. As a Royal Navy officer, Lucas Mandeville, Lord Foxton, has fought his share of battles on the high seas, followed by long years of imprisonment. But on this night, he’d rather be on the burning deck of a ship than in a ballroom, where it is just a matter of time before someone challenges him because of what happened on the Continent.

A woman who has lost her reputation is nothing . . .

When dark-haired beauty Kendra Douglas arrives, a whisper of scandal ripples through the ton. The disgraced divorcee’s entrance is an act of daring. Which is exactly why Lucas asks her to dance . . .

A couple who stands together has everything . . .

Unexpectedly, Lucas offers Kendra his aid in finding the evidence to regain her good name—and her beloved young son. Together they investigate the wicked conspiracy that destroyed her life, and in the midst of danger, find a deep love that will redeem them both—if only they can live long enough to build a future together.

Mary Jo Putney is a New York Times and USA Today bestselling author who has written over sixty novels and novellas. A ten-time finalist for the Romance Writers of America RITA, she has won the honor twice and is on the RWA Honor Roll for bestselling authors. In 2013 she was awarded the RWA Nora Roberts Lifetime Achievement Award.  Though most of her books have been historical romance, she has also published contemporary romances, historical fantasy, and young adult paranormal historicals. She lives in Maryland with her nearest and dearest, both two and four-footed. Visit her at maryjoputney.com.

Praise for Once Dishonored

“Putney continues her Regency-era Rogues Redeemed series with this enthralling fifth installment about a pair of outcasts who find comfort with one another…With this emotional romance, Putney again proves why she’s a star of the genre.”
—Publishers Weekly

“Once Dishonored is the story of a wronged divorcee, and a man trying to redeem his honor after disgrace. It’s an intense, dramatic love story with improbable twists and turns, adventure, and visits from old friends. It’s a thoroughly enjoyable read.”
—All About Romance

“In her own signature style, paying impeccable attention to period details, Putney continues to vindicate the honor of scoundrels in this fifth entry of the stunning “Rogues Redeemed” series (after Once a Spy). Fans of historicals will root for our brave, intelligent heroine and the hero who stands beside her.”
—Library Journal STARRED REVIEW

“With superbly drawn characters (including historical figures such as Francis Scott Key); a setting so vivid one can taste the lemonade and smell the gunpowder; and a gripping plot that addresses the harsh realities of slavery, prejudice, cruelty, and abuse. . . . A story that deftly balances fascinating historical detail, adventure, and menace with a passionate romance.”
—Library Journal

“Putney's commitment to historical research shines throughout. . . . Though suspense and adventure drive this story forward, the love at its center sets it apart.”
—Kirkus Reviews

“An impeccably written book that realistically integrates the cost of the Napoleonic Wars into a compelling story that neatly balances dangerous adventures and passionate romance.”
—Booklist

“Filled with action and adventure and spiced with an intriguing glimpse of American history . . . not
to be missed.”
—Bookpage

“A Baltimore native, Putney knows her history well and makes good use of that knowledge as she brings an English hero and heroine into the second war for America’s freedom. Readers who savor details for the era will find everything they desire.”
—RT Book Reviews