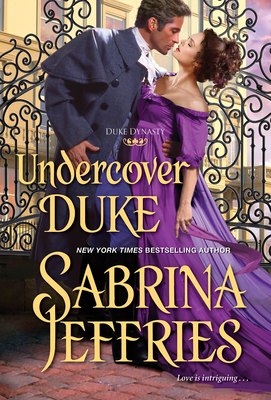 This is book number 4 in the Duke Dynasty series.

In the fourth Duke Dynasty novel, New York Times bestselling author Sabrina Jeffries, one of the best-known names in historical romance, weaves an enchanting Regency romance with a mystery at its core, as stepsiblings investigate the truth about their mother’s succession of beloved husbands—and their own surprising identities as eligible young nobles. For an uptight Duke still nursing a broken heart, the last thing he needs is a pretend engagement with a vivacious and alluring young woman. As they’re drawn deeper into secret schemes, could she solve not just the mystery of his family, but the riddle of his heart as well?

Along with his stepsiblings, Sheridan Wolfe, Duke of Armitage, is determined to finally solve the mysteries behind the suspicious deaths of their mother’s three husbands. Tasked with investigating a possible suspect, Sheridan finds himself in dangerous proximity to her captivating daughter, Vanessa Pryde. But still haunted by a tragically lost love, the duke is resolved to resist the attraction—and avoid any “scheming” husband-hunters. Besides, lovely Miss Pryde seems utterly smitten with a roguish London playwright…

Vanessa thinks a little scheming may be in order—for it’s Sheridan she truly has her sights, and her heart, set on. Her theatrical flirtation is intended only to break through his business-like demeanor and guarded emotions. And as Sheridan’s jealousy becomes aroused, the two soon find themselves propelled into a scheme of an altogether different kind, involving a pretend engagement, a secret inquiry—and a perhaps not-so-secret leap into true love…

Sabrina Jeffries is the New York Times bestselling author of more than fifty novels and works of short fiction (some written under the pseudonyms Deborah Martin and Deborah Nicholas). Her writing has been published in more than twenty-one languages and there are over nine million copies of her books in print. A four-time RITA® Award-finalist, Jeffries has won the Holt Medallion Award, the Maggie, and the Booksellers' Best Award. After earning her Ph.D. in English Literature from Tulane University, she chose writing over academics, and now her sexy and humorous historical romances routinely land on the New York Times and USA Today bestseller lists. Sabrina lives in North Carolina with her husband and adult son, who has inspired her to actively champion the cause of autistic children. Visit her online at SabrinaJeffries.com.

“An appealing historical romance from a fan favorite.”
—Kirkus Reviews

“Riveting. . . . Complex, intense characters heat up the pages with scintillating love scenes amid the intrigue. . . . Romance fans will eagerly await the next book.”
—Publishers Weekly

Praise for THE BACHELOR

“A tautly constructed plot spiced with danger and plenty of red-hot sensuality.”
—Booklist

“Jeffries explores the cultural mores of early Regency London to weave a tale of blackmail, spies, and a Season debut. . . .There is an overarching series mystery developing, but readers yet to pick up the previous title, Project Duchess, shouldn’t be deterred.”
—Library Journal