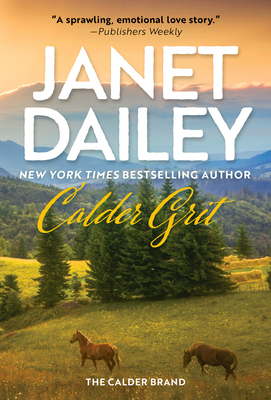 This is book number 2 in the The Calder Brand series.

With all the intense drama, historical detail and grand sweep of her original New York Times bestselling Calder series, Dailey returns to 1909 Montana, as tensions mount between immigrant homesteaders and cattlemen determined to keep the range free. Adding a Romeo and Juliet romance with shades of Legends of the Fall to a compelling plot that pits farmer against cattleman and brother against brother, Dailey brings fresh life to the story of America's westward expansion. Now in Mass Market Max for the first time!

Summer 1909: A battle rages in Blue Moon, Montana, between immigrant homesteaders and cattlemen determined to keep the range free. In a fierce struggle that echoes the challenges of today, history is made.

Blake Dollarhide is a rancher’s son and the ambitious young owner of Blue Moon’s lumber mill. When his spoiled half-brother takes advantage of the innocent daughter of a homesteading family, Blake steps in as Hanna Anderson’s bridegroom to restore her honor and give her unborn child his name.  But Blake doesn’t count on the storm of feelings he develops for sweet Hanna. As the range war escalates, everyone wonders if Blake will stand by his close-knit community, or the wife he took in name only . . .

A marriage of love is more than Hanna ever dreamed of. For her family, surviving the rugged trip west, claiming a parcel of land and planting their first crops are all that matter. Now, even as she longs to trust the passionate bond between her and Blake, Hanna knows it will take courage to overcome their differences. And even greater strength to put down roots in this wild new country.
The epic tale of the settling of the American West comes to vivid life in this inspiring saga of love, hope and endurance.

Janet Dailey, known as “America’s First Lady of Romance,” published her first book in 1976 and went on to became one of the  top selling female authors in the world, with 325 million copies of her books sold in nineteen languages in ninety eight countries.  She is known for her strong, decisive characters, her extraordinary ability to recreate a time and a place, and her unerring courage to confront important, controversial issues in her stories. To learn more about Janet Dailey and her novels, please visit  JanetDailey.com or find her on Facebook at Facebook.com/JanetDaileyAuthor.

Praise for the Novels of Janet Dailey

“Dailey highlights the brutal reality of survival in the American West while building a sprawling, emotional love story for Joe and Sarah. Both fans and newcomers to Dailey’s novels will be pleased.” —Publishers Weekly on Calder Brand

“PARADISE PEAK is the story of perseverance in the face of danger. Danger comes in many forms and in PARADISE PEAK we witness the best and worst of human beings and nature...Fabulous characters.” —Fresh Fiction on Paradise Peak

“Janet Dailey is always a great and wonderful read and will have you wanting to get to know the entire Calder family.” —Fresh Fiction on Calder Brand

"Twists and surprises will keep the pages of this warm-hearted romance turning." —Publishers Weekly on Texas Forever

"Readers have been waiting more than a year for the next installment in author Janet Dailey's New Americana series, and it has finally arrived. Letters from Peaceful Lane gives readers a deeply personal view of life in the Ozark Mountains." —Woman's World

"Dailey gives readers a steadily paced novel showcasing the harsh realities that many second marriages undergo. The detailed character development shines...adding nuance to the contemporary romances. Fans of Susan Wiggs and Debbie Macomber will enjoy the third in Dailey's New Americana series, which emphasizes that family struggles can be overcome, and love will always prevail." —Booklist on Letters from Peaceful Lane

"As captivating as it is swoon-worthy." —First for Women on Hart's Hollow Farm