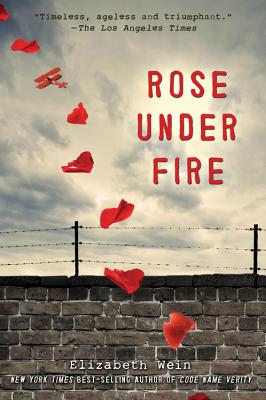 While flying an Allied fighter plane from Paris to England, American ATA pilot and amateur poet, Rose Justice, is captured by the Nazis and sent to Ravensbr¿ck, the notorious women's concentration camp. Trapped in horrific circumstances, Rose finds hope in the impossible through the loyalty, bravery and friendship of her fellow prisoners. But will that be enough to endure the fate that's in store for her?

Elizabeth Wein, author of the critically-acclaimed and best-selling Code Name Verity, delivers another stunning WWII thriller. The unforgettable story of Rose Justice is forged from heart-wrenching courage, resolve, and the slim, bright chance of survival.

Elizabeth Wein was born in New York City, grew up abroad, and currently lives in Scotland with her husband and two children. She is an avid flyer of small planes. She also holds a PhD in Folklore from the University of Pennsylvania. Visit her at www.elizabethwein.com.

* "[A]lthough the story's action follows [Code Name Verity]'s, it has its own, equally incandescent integrity. Rich in detail, from the small kindnesses of fellow prisoners to harrowing scenes of escape and the Nazi Doctors' Trial in Nuremburg, at the core of this novel is the resilience of human nature and the power of friendship and hope."—Kirkus Reviews, starred review

* "Wein excels at weaving research seamlessly into narrative and has crafted another indelible story about friendship borne out of unimaginable adversity."—Publishers Weekly, starred review

* "Readers will connect with Rose and be moved by her struggle to go forward, find her wings again, and fly."—School Library Journal, starred review

* "In plot and character this story is consistently involving, a great, page-turning read; just as impressive is how subtly Wein brings a respectful, critical intelligence to her subject."—The Horn Book, starred review

* "At once heartbreaking and hopeful, Rose Under Fire will stay with readers long after they have finished the last page."
—VOYA, starred review

" Rose Under Fire' is bound to soar into the promised land of young adult books read by actual adults-and deservedly so, because Wein's unself-consciously important story is timeless, ageless and triumphant."—The Los Angeles Times

"The horror of the camp, with its medical experimentation on Polish women-called Rabbits-is ably captured. Yet, along with the misery, Wein also reveals the humanity that can surface, even in the worst of circumstances."
—Booklist

"[A]n impressive story of wartime female solidarity."
—The Bulletin of the Center for Children's Books

*"A riveting and often brutal tale of WWII action and espionage with a powerful friendship at its core. [an] expertly crafted adventure."—Publishers Weekly, starred review

*"[An] innovative spy tale built to be savored."—Bulletin of the Center for Children?s Books (starred review)

*"[A] taut, riveting thriller. Readers will be left gasping for the finish, desperate to know how it ends."—School Library Journal (starred review)

* "If you pick up this book, it will be some time before you put your dog-eared, tear-stained copy back down."—Booklist (starred review)

"This astonishing tale of friendship and truth will take wing and soar into your heart."—Laurie Halse Anderson, New York Times best-selling author of Speak, Fever 1793 and Wintergirls

"The unforgettable Code Name Verity played with my mind, and then it ripped out my heart."—Nancy Werlin, New York Times best-selling author

"Maddie and Verity's extraordinary bravery is reflected in frank narrative as they both fight against time and a horrific, powerful enemy...The themes of hope, friendship, and determination even in the most impossible situations are relevant to all readers."—VOYA

"A fiendishly plotted mind game of a novel, the kind you have to read twice."—The New York Times

"It has been a while since I was so captivated by a character in YA fiction Code Name Verity is one of those rare things: an exciting-and affecting-female adventure story."—The Guardian

"The word crossover appears many times on publisher information sheets, but this is the real deal. An incredibly assured debut novel, full of convincing detail, heart-stopping emotion and tension. I have high hopes for Code Name Verity."—The Bookseller

"For me, Code Name Verity is the best of both worlds: an exciting, well-researched masterpiece of historical fiction with a contemporary sensibility....It brought me to tears to realize that I'll never be able to read it again for the first time. That is how powerful a story this is."—Richie's Picks