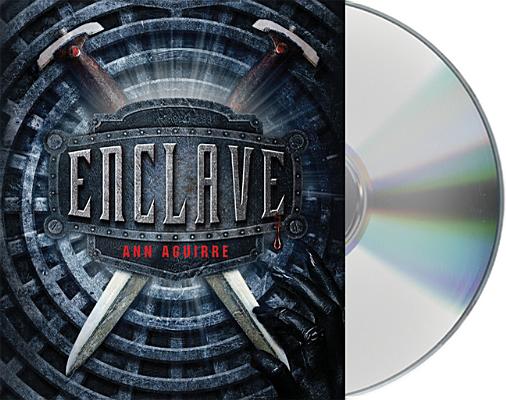 This is book number 1 in the The Razorland Trilogy series.

Ann Aguirre's thrilling young adult novel Enclave is the story of two young people in an apocalyptic world--facing dangers, and feelings, unlike any they've ever known.

New York City has been decimated by war and plague, and most of civilization has migrated to underground enclaves, where life expectancy is no more than the early 20's. When Deuce turns 15, she takes on her role as a Huntress, and is paired with Fade, a teenage Hunter who lived Topside as a young boy. When she and Fade discover that the neighboring enclave has been decimated by the tunnel monsters--or Freaks--who seem to be growing more organized, the elders refuse to listen to warnings. And when Deuce and Fade are exiled from the enclave, the girl born in darkness must survive in daylight--guided by Fade's long-ago memories--in the ruins of a city whose population has dwindled to a few dangerous gangs.

ANN AGUIRRE is a New York Times & USA Today bestselling author and RITA winner with a degree in English literature. She lives in sunny Mexico with her husband, children, and various pets. She likes books, emo music, and action movies. She writes all kinds of genre fiction for adults and teens, including the Razorland series and Like Never and Always.

Emily Bauer is an award-winning voiceover actress who has read for dozens of popular audiobooks for children and adults, including Margery Williams’s Velveteen Rabbit, Meg Cabot’s Insatiable, and Ann Aguirre’s Enclave. Her film credits include Mona Lisa Smile and Long Distance. She has done voiceovers for Nausicaä of the Valley of the Wind and Pokemon and has voiced scores of TV and radio commercials as well as cartoons, talking toys, and video games. She lives in New York.

“Emily Bauer effectively voices the pride and fear that mingle in Deuce as she and her enigmatic partner, Fade, carry out their job of protecting and feeding their clan.” —AudioFile Magazine

“I popped the first CD into my car's stereo and was immediately hooked…Ms. Bauer reads the tale with all the tension and anticipation that is Deuce's world…This is the type of story that lends itself well to the audiobook format. It's a dark tale, and listening to Ms. Bauer describe the world of the enclave and the tunnels, the listener can close their eyes…and totally picture everything being described.” —Teens Read Too

“I loved [Emily Bauer's] voice and her pace and felt entranced while listening. I believe that if I had read it, I wouldn't have enjoyed it quite so much.” —YA Bliss

“[Enclave] is a young adult dystopian novel and has been compared to the hit series The Hunger Games. To say we're excited is a major understatement…” —ElleGirl.com

“In her first young adult novel, Aguirre (the Sirantha Jax series) has created a gritty and highly competent heroine, an equally deadly sidekick/love interest, and a fascinating if unpleasant civilization. This series is likely to hold considerable appeal for fans of The Hunger Games.” —Publishers Weekly

“Enclave is dark and thrilling, fast-paced and intense. With some graphic and gross imagery and a hard look at a post-apocalyptic world, Aguirre has taken themes from Scott Westerfeld and an assortment of zombie literature and created something that is very much her own -- and a very engaging read.” —RT Book Reviews

“Aguirre's young adult debut is a gripping survival story set in an apocalyptic future. . . This is a tense, action-packed dystopia with intriguingly gray characters. . . ” —Booklist

“Deuce's passion for life, even in her bleakest moments, is contagious, and that passion exemplifies the nebulous force that has driven all of these individuals to persist in the face of awful options.” —The Bulletin of the Center for Children's Books