The English Wife: A Novel (CD-Audio) 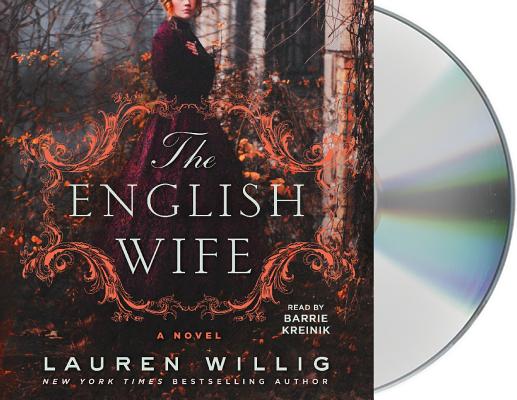 By Lauren Willig, Barrie Kreinik (Read by)
$57.99
Backordered or Out of Print

"Brings to life old world New York City and London with all the splendor of two of my favorite novels, The Age of Innocence and The Crimson Petal and the White. Mystery, murder, mistaken identity, romance--Lauren Willig weaves each strand into a page-turning tapestry."--Sally Koslow, author of The Widow Waltz

"Her best yet...A dark and scintillating tale of betrayal, secrets and a marriage gone wrong that will have readers on the edge of their seats until the final breathtaking twist."--Pam Jenoff, New York Times bestselling author of The Orphan's Tale

A Book of the Month club pick!

Annabelle and Bayard Van Duyvil live a charmed life in New York: he’s the scion of an old Knickerbocker family, she grew up in a Tudor house in England, they had a fairytale romance in London, they have three-year-old twins on whom they dote, and he’s recreated her family home on the banks of the Hudson and named it Illyria. Yes, there are rumors that she’s having an affair with the architect, but rumors are rumors and people will gossip. But then Bayard is found dead with a knife in his chest on the night of their Twelfth Night Ball, Annabelle goes missing, presumed drowned, and the papers go mad. Bay’s sister, Janie, forms an unlikely alliance with a reporter to try to uncover the truth, convinced that Bay would never have killed his wife, that it must be a third party, but the more she learns about her brother and his wife, the more everything she thought she knew about them starts to unravel. Who were her brother and his wife, really? And why did her brother die with the name George on his lips?

LAUREN WILLIG is the author of the New York Times bestselling Pink Carnation series and a RITA Award-winner for Best Regency Historical for The Mischief of Mistletoe. She graduated from Yale University, and has a graduate degree in English history from Harvard and a J.D. from Harvard Law School. She lives in New York City, where she now writes full time.

"With a smooth Mezzo and immaculate intonations Barrie Kreinik’s narration is impeccable, perfectly portraying each and every character and adding special emotional touches where they’re really needed." -TheReadingFrenzy

"The English Wife is atmospheric, romantic and heart-breaking, and I’m glad I opted to listen to it. The enthralling story, coupled with Barrie Kreinik’s outstanding narration, makes it an audiobook I’d definitely recommend to anyone looking to enjoy an intricate, well-constructed and character-driven mystery." -AudioGals

"Willig's audiobook, set in Gilded Age New York and London, is a mix of romance, mystery, and murder. Narrator Barrie Kreinik is a perfect fit for the mix of British and American characters...Kreinik's reading is slow paced, allowing the tension to build as the story unfolds." -AudioFile