The Curse (The Beladors) (Mass Market) 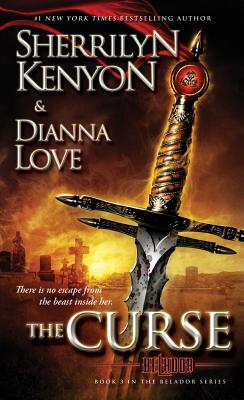 This is book number 3 in the The Beladors series.

The third exciting novel in the popular Belador paranormal series, featuring a league of international warriors with extraordinary abilities who rise up to save mankind from supernatural terrorists.

Evalle Kincaid will fight to the death for her supernatural friends.

But when Sherrilyn Kenyon and Dianna Love’s tough-as-nails heroine reveals her darkest secret, who among those she had trusted will be left standing?

With the freedom of an entire race hanging in the balance, Evalle has two days to make good on a promise that she suddenly has no hope of fulfilling when demonic Svart Trolls invade Atlanta. She takes a leap of faith, seeking help from the one man who recently put Evalle in his crosshairs—Black Ops specialist Isak Nyght. While trying to stop the bloody troll-led gang wars, Evalle unwittingly exposes a secret that endangers all she holds dear and complicates her already tumultuous love life with the mysterious Skinwalker, Storm. But when Evalle discovers she’s the number one target in the Medb coven’s ruthless plan to destroy all Beladors, the deadly Alterant is forced to make a game-changing decision with no time left on the clock.

Sherrilyn Kenyon is the #1 New York Times bestselling author of several series, including the Bureau of American Defense novels BAD Attitude, Phantom in the Night, Whispered Lies, and Silent Truth and the Belador series that includes Blood Trinity, Alterant, and The Curse. Since her first book debuted in 1993 while she was still in college, she has placed more than eighty novels on the New York Times list in all formats and genres, including manga and graphic novels, and has more than 70 million books in print worldwide. She lives with her family near Nashville, Tennessee. Visit her website at SherrilynKenyon.com.

Dianna Love is the New York Times bestselling coauthor of nine novels. She is a national speaker who started writing while working over a hundred feet in the air, creating marketing projects for Fortune 500 companies. When not plotting out her latest action-adventure, she travels the country on a motorcycle to meet fans and research new locations. She and her husband live near Atlanta, Georgia. Visit her website at AuthorDiannaLove.com.

The precarious action and genuine emotion in THE CURSE will continuously leave the reader breathless.
— SingleTitles Books Reviews