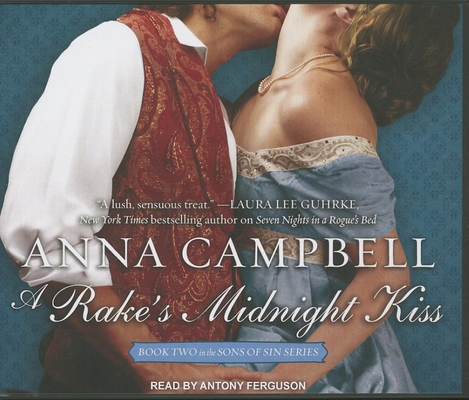 By Anna Campbell, Antony Ferguson (Narrated by)
Email or call for price.
Out of Print

This is book number 2 in the Sons of Sin series.

Brilliant scholar Genevieve Barrett's secret identity as the author of her father's articles is her greatest deception-until her father's handsome new student arrives on their doorstep. Genevieve recognizes him as the masked intruder who earlier tried to steal a priceless gem from their home. Keeping the seductive stranger's identity hidden is a risk, but she's got secrets of her own to keep. Sir Richard Harmsworth fakes a rakish facade to show society that he doesn't care about his bastard status. Yet haunted by his unknown father's identity, Richard believes the Harmsworth Jewel will prove he's the rightful heir. Intent on seducing the stone away from its owner, Richard finds himself face-to-face with a beauty more breathtaking than any jewel. But even as she steals Richard's heart, Genevieve will be in greater danger than her coveted treasure . . .

Anna Campbell has twice been voted Favorite Australian Romance Writer by the Australian Romance Readers Association (2009 and 2010). Among her many novels are the multi-award winning "Claiming the Courtesan" and "Captive of Sin," which was among "Publishers Weekly"'s Top 100 Books of 2009.

Antony Ferguson, a native of London, England, is a classically trained actor and has appeared in numerous productions in London, Off Broadway, and Regional theater. As a voice actor, he has over fifty audiobooks to his credit.