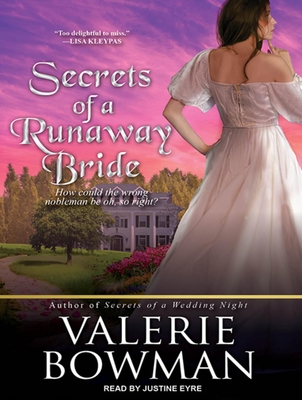 By Valerie Bowman, Justine Eyre (Narrated by)
Email or call for price.
Out of Print

Annie Andrews has her heart set on marrying a certain man. Now that her guardian and sister, Lily, is off on her wedding trip on the continent, Annie is about to make one last attempt to marry Arthur before her sister can stop her. But Annie doesn't count on the best friend of her new brother-in-law, Jordan Holloway, Earl of Ashbourne, fouling up her plans. Jordan has vowed to keep an eye on the mischievous Miss Andrews. He has two weeks to keep her out of trouble and to keep her from running away again. But when Jordan carts her off to his country house to keep her from making a mistake, will he make one of his own and fall in love with the one woman he shouldn't touch?

Valerie Bowman is the award-winning author of the Secret Brides series. She holds a BA in English language and literature from Smith College.

Justine Eyre is a classically trained actress who has narrated over two hundred audiobooks. With a prestigious Audie Award and four "AudioFile" Earphones Awards under her belt, Justine is multilingual and is known for her great facility with accents. Her recent television credits include "Two and a Half Men" and "Mad Men."