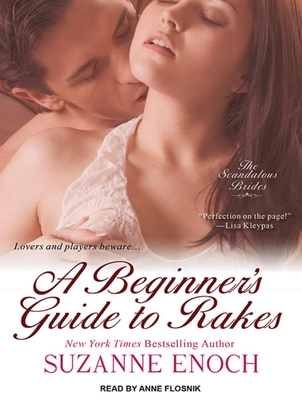 By Suzanne Enoch, Anne Flosnik (Narrated by)
Email or call for price.
Out of Print

This is book number 1 in the Scandalous Brides series.

All of London is abuzz with the return of the utterly alluring, recently widowed Diane Benchley. Will she remarry? What will she do with her late husband's fortune? Society is shocked by her announcement--at the Grand Ball, of all places --that she plans to open an exclusive gentleman's gaming club in the family mansion. But no one is more stunned than the Marquis of Haybury, Oliver Warren.Years ago, Oliver and Diane shared a private indiscretion. Now Diane threatens to reveal Oliver's most ungentlemanly secrets...unless he agrees to help her. A notorious gambler--and rake--Oliver is overqualified to educate Diane in the ways and means of running her establishment. But striking a deal with Diane might just be the biggest risk Oliver has ever taken. This time, the only thing he has to lose is his heart...

"Enoch will have [fans] tittering behind their fans at this hilarious Regency." ---Publishers Weekly