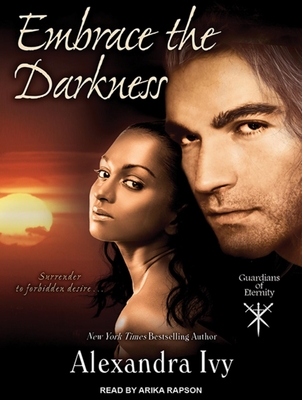 By Alexandra Ivy, Arika Rapson (Narrated by)
$83.99
Email or call for price

This is book number 2 in the Guardians of Eternity series.

Lady Shay is the last of her kind. Half human, half Shalott, her blood is a precious aphrodisiac to vampires, who consider it more precious than gold. Though Shalotts are renowned assassins, a curse held over Shay lands her on the slave auction block, where her fate is uncertain. Viper, the beguiling chief of a deadly vampire clan, can't explain his longing to possess the beautiful Shalott who once saved his life, but now he is free to do anything he wants with her. Strangely, while he desires both Shay's blood and body, he wants her to surrender willingly. A hidden evil has been stalking Shay since she left the slave market with Viper. It is an evil that endangers the very existence of Viper's kind, and there's no reason he should court such danger just to protect a Shalott. But the love he feels for Shay is enough to make him willing to go to hell and back if it means spending an eternity with her in his arms.