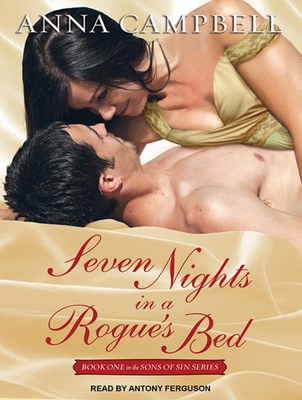 This is book number 1 in the Sons of Sin series.

Desperate to save her sister's life, Sidonie Forsythe has agreed to submit herself to a terrible fate: Beyond the foreboding walls of Castle Craven, a notorious, hideously scarred scoundrel will take her virtue over the course of seven sinful nights. Yet instead of a monster, she encounters a man like no other. And during this week, she comes to care for Jonas Merrick in ways that defy all logic-even as a dark secret she carries threatens them both.Ruthless loner Jonas knows exactly who he is. Should he forget, even for a moment, the curse he bears, a mere glance in the mirror serves as an agonizing reminder. So when the lovely Sidonie turns up on his doorstep, her seduction is an even more delicious prospect than he originally planned. But the hardened outcast is soon moved by her innocent beauty, sharp wit, and surprising courage. Now as dangerous enemies gather at the gate to destroy them, can their new, fragile love survive?

Anna Campbell has twice been voted Favorite Australian Romance Writer by the Australian Romance Readers Association (2009 and 2010). Among her many novels are the multi-award winning "Claiming the Courtesan" and "Captive of Sin," which was among "Publishers Weekly"'s Top 100 Books of 2009.

"AudioFile" Earphones Award winner Antony Ferguson, a native of London, England, is a classically trained actor and has appeared in numerous productions in London, Off-Broadway, and regional theater. As a voice actor, he has over fifty audiobooks to his credit.