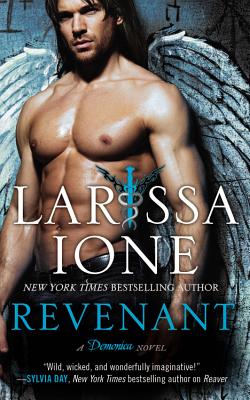 By Larissa Ione
$8.00
Backordered or Out of Print

This is book number 7 in the Demonica series.


HELL HATH NO FURY . . .
For five thousand years, Revenant believed he was alone in the world, a fallen angel beyond any redemption. Now he finds he has a twin brother who had all the light and love Revenant was denied. Caught in a tug of war between Heaven and Hell, he must weigh his thirst for revenge against his desire for a mysterious female named Blaspheme-a female whose very origins could deliver him into salvation . . . or destruction.

LIKE AN ANGEL SCORNED
Blaspheme has a deadly secret: she's the forbidden offspring of an angel and a fallen angel. Hunted by both heavenly and satanic forces, she has survived only by laying low and trusting no one. When Revenant claims he can save them both, how can she possibly believe him? But the powerful angel is persistence incarnate and for Blaspheme, there's no place she can hide in Heaven or Hell where he won't find her . . .

"4 1/2 Stars! Top Pick! At last Ione delivers the book fans have been clamoring for: the story of Reaver and Harvester. True to form, this relationship is a hot mess - in ever sense. Ione's Demonica world continues to be both rich and gritty, not to mention populated with memorable characters. Like a fine wine, this series is aging spectacularly!"—RT Book Reviews on Reaver

"4 1/2 Stars! Megatalent Ione is at the top of her game as she concludes her Lords of Deliverance series with a story of redemption and sacrifice. Ione is a master at turning on the emotion and passion by bringing together a woman damaged by demons and a man whose guilt threatens to destroy him."—RT Book Reviews on Rogue Rider

"Doomsday is fast approaching unless the remaining Horsemen of the Apocalypse can prevent it. In the previous Lords of Deliverance novel, Thanatos, the horseman of Death, was tricked and now the world may shake with his anger. Gifted storyteller Ione's tales are gripping and dark, filled with tragedy and hope. Transfixing!"—RT Book Reviews on Lethal Rider

"Ione's third Lords of Deliverance paranormal builds the secondary story line of Immortal Rider into a rollicking ride of thrills, angst, and sexual heat. Thanatos, aka Death, is one angry Horseman of the Apocalypse. Aegis Guardian and OCD sufferer Regan Matthews molested him while he was drugged, and those around him conspired to keep her resultant pregnancy a secret. Thanatos kidnaps Regan, vowing to keep her his sexual prisoner, but her genuine remorse over tricking him to impregnate her so that the birth of their baby might prevent the Apocalypse wears down his resolve and opens the door to a fiery and moving romance between damaged souls. Meanwhile, those trying to avert the upcoming end of the world must cope with double-crossing Watchers, false prophecies, vampires with a grudge, and the ongoing treachery of Death's brother Pestilence. Ione humanizes her leads and also captures the urgency of their mission, resulting in a very satisfying read."—Publishers Weekly on Lethal Rider

"4 Stars! Ione has a true gift for imbuing her characters with dark-edged passion. . . a top notch read."—RT Book Reviews on Desire Unchained

"4 Stars! The author's hard-edged style infuses the story with darkness while taking it to sizzling heights."—RT Book Reviews on Pleasure Unbound