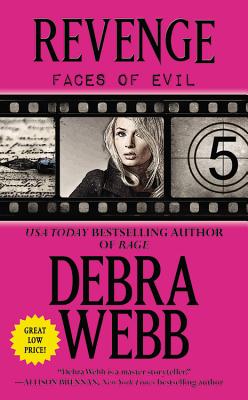 By Debra Webb
$6.00
Backordered or Out of Print

This is book number 5 in the Faces of Evil series.

The desire for revenge can never be sated . . .
When her beloved high school teacher appears on her doorstep, Deputy Chief Jess Harris is flooded with fond memories-until the woman says she's about to be charged with murder. Called to the scene of the crime, Jess learns the victim of the bizarre and brutal slaying was a member of Birmingham's famed "Five."

Twelve years ago, the Five were rich, popular high school seniors who threw one wild last party. Two social outcasts were invited to play in the "loser games." The next morning, one player killed himself. Now Jess fears that an invitation to an upcoming class reunion may have forced the Five to play a new deadly game. As Jess fights to keep her former teacher from suspicion-and her relationship with Chief Dan Burnett separate from her work life-she knows she is caught in a vicious cycle of vengeance. And the killer is far from finished . . .

"Just when you think Debra Webb can't get any better, she does. OBSESSION is her best work yet. This gritty, edge of your seat, white knuckle thriller is peopled with tough, credible characters and a brilliant plot that will keep you guessing until the very end. Move over Jack Reacher - Jess Harris is comin' to town." -- Cindy Gerard, New York Times best-selling author, award winning author of the Black Ops, Inc. series