A Scoundrel by Moonlight (Sons of Sin #5) (Mass Market) 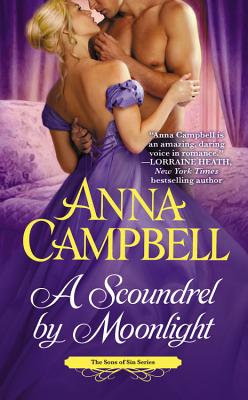 By Anna Campbell
Email or call for price.
Special Order

This is book number 5 in the Sons of Sin series.

A woman seeks revenge by posing as a housemaid and taking down the rogue that broke her sister's heart in this character-driven, sinful, historical romance.

A woman seeks revenge by posing as a housemaid and taking down the rogue that broke her sister's heart in this character-driven, sinful, historical romance. Justice. That's all Nell Trim wants-for her sister and for the countless other young women the Marquess of Leath has ruined with his wildly seductive ways. Now she has a bold plan to take him down . . . as long as she can resist the scoundrel's temptations herself. From the moment Nell meets James Fairbrother, the air positively sizzles. Yet for all his size and power, there's something amazingly tender in his touch. Could he really be such a depraved rogue? The only way to find out is to beat the devil at his own game . . . one tempting kiss at a time. Anything can happen in the moonlight . . .

Always a voracious reader, Anna Campbell decided when she was a child that she wanted to be a writer. Once she discovered the wonderful world of romance novels, she knew exactly what she wanted to write. Anna has won numerous awards for her historical romances, including the RT Book Reviews Reviewers' Choice, the Booksellers' Best, the Golden Quill (three times), the Heart of Excellence, the Aspen Gold (twice), and the Australian Romance Readers Association's most popular historical romance (five times). Her books have twice been nominated for Romance Writers of America's prestigious RITA Award and three times for Romance Writers of Australia's Romantic Book of the Year.

When she's not writing passionate, intense stories featuring gorgeous Regency heroes and the women who are their destiny, Anna loves to travel, especially in the United Kingdom, and listen to all kinds of music. She lives near the sea on the east coast of Australia, where she's losing her battle with an overgrown subtropical garden.

"Campbell immediately hooks readers, then deftly reels them in with a spellbinding love story fueled by an addictive mixture of sharp wit, lush sensuality, and a wealth of well-­delineated characters."—Booklist on A SCOUNDREL BY MOONLIGHT, starred review

"4 1/2 Stars! Top Pick! Campbell's vibrant voice rings out in another touching, humorous and utterly delightful story. Her multidimensional characters' dialogue sparkles with wit and the sensuality blazes across the page."—RT Book Reviews on What a Duke Dares

"4 1/2 Stars! Top Pick! Campbell's vibrant voice rings out in another touching, humorous and utterly delightful story. Her multidimensional characters' dialogue sparkles with wit, and the sensuality blazes across the page. Though a charming twist on a marriage of convenience plot, it's the unconventional Cam and Penelope and their escapades that make this third Sons of Sin book an extraordinary read."—RT Book Reviews on What a Duke Dares

"Campbell makes the Regency period pop in the appealing third Sons of Sin novel. Romantic fireworks, the constraints of custom, and witty banter are combined in this sweet and successful story."—Publishers Weekly on What a Duke Dares

"Campbell is exceptionally talented, especially with plots that challenge the reader, and emotions and characters that are complex and memorable."—Sarah Wendell, Smart Bitches Trashy Books, on A Rake's Midnight Kiss

"A lovely, lovely book that will touch your heart and remind you why you read romance."—Liz Carlyle, New York Times bestselling author on What a Duke Dares

"Campbell holds readers captive with her highly intense, emotional, sizzling and dark romances. She instinctually knows how to play on her readers' fantasies to create a romantic, deep-sigh tale."—RT Book Reviews, Top Pick, on Captive of Sin

"Don't miss this novel - it speaks to the wild drama of the heart, creating a love story that really does transcend class."—Eloisa James, New York Times bestselling author, on Tempt the Devil

"Seven Nights in the Rogue's Bed is a lush, sensuous treat. I was enthralled from the first page to the last and still wanted more,"—Laura Lee Guhrke, New York Times bestselling author

"No one does lovely, dark romance or lovely, dark heroes like Anna Campbell. I love her books,"—Sarah MacLean, New York Times bestselling author