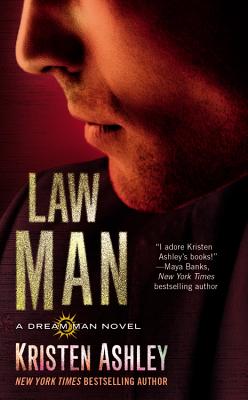 This is book number 3 in the Dream Man series.

Sweet, shy Mara Hanover is in love with her neighbor. For four years, she has secretly watched her dream man from afar. Handsome police detective Mitch Lawson is way out of her league. She's a girl from the wrong side of the tracks, and there's no way a guy like Mitch would want anything to do with her. But when Mara has a leaky faucet that she can't fix, it's Mitch who comes to her rescue.

Mitch has been eyeing his beautiful neighbor for a long time. He jumps at the chance to help her, and soon their formerly platonic relationship gets very hot and heavy. But when Mara gets a disturbing phone call from her cousin's kids, she gets pulled back into the life she's tried so hard to leave behind. Can the hot law man convince Mara to let go of her past-and build a future with him?

"4 1/2 Stars! Top Pick! Sizzling-hot talent Ashley really knocks one out of the park with the third installment of her Dream Man series. Law Man has everything --- humor, sexy sizzle, gut-punching emotion and an element of danger - all wrapped up in an exhilarating package. The addition of heart-tugging kids to the mix elevates this story to a new level. This book really hits all the right notes; Ashey is on the fast track to becoming a superstar!"—RT Book Reviews on Law Man

"A thread of mystery helps this fast-paced novel effectively deliver both romance and suspense."—Publishers Weekly on Law Man

"I felt all of the rushes, the adrenaline surges, the anger spikes... my heart pumping in fury. My eyes tearing up when my heart (I mean... her heart) would break." (On Motorcycle Man)
—Maryse's book blog, maryse.net, 2012

"There is something about them [Ashley's books] that I find crackalicious."
—Kati Brown, DearAuthor.com