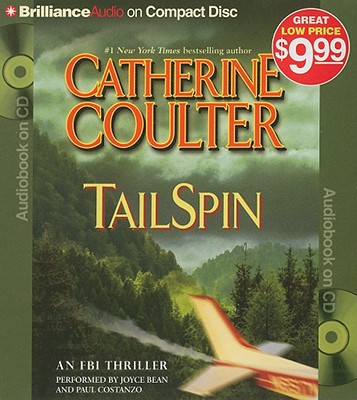 By Catherine Coulter, Joyce Bean (Read by), Paul Costanzo (Read by)
$9.99
Backordered or Out of Print

This is book number 12 in the FBI Thriller series.

FBI Special Agent Jackson Crowne is flying renowned psychiatrist Dr. Timothy MacLean back to Washington, D.C., to protect him and discover who's trying to kill him. But they don't make it. That same morning, agents Savich and Sherlock are told about Agent Crowne's Mayday sent from deep in the Appalachian mountains near Parlow, Kentucky. Within thirty minutes, Savich and Sherlock are aboard an FBI helicopter, headed for Parlow. Agent Crowne barely manages to bring his Cessna down in the narrow Cudlow Valley and haul the unconscious Dr. MacLean from the burning wreckage before it explodes. Their crash is witnessed by Rachael Abbott, a young woman who has just narrowly escaped drowning by assailants who drugged her, tied her to a cement block, and threw her into Black Rock Lake. When Savich and Sherlock arrive in Parlow, they discover Jack is down but not out, that Rachael saved his and Dr. MacLean's lives, and that she's hiding something big. To add to the complexity of the situation, Dr. MacLean has been diagnosed with frontal lobe dementia, a pernicious disease that makes the victim say whatever comes to mind with no regard to consequences. With a patient list of Washington's elite movers and shakers, MacLean has almost certainly compromised doctor-patient confidentiality, and one of his patients, they presume, is out to shut him up. But which one, and why?