Journey Into the Flame: Book One of the Rising World Trilogy (Paperback) 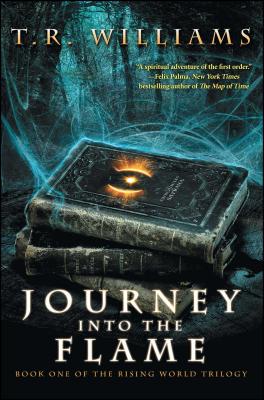 This is book number 1 in the The Rising World Trilogy series.

In the tradition of The Celestine Prophecy comes the first book in a gripping post-apocalyptic trilogy involving the search for ancient books whose secrets hold the key to humanity’s survival.

In 2027, the Great Disruption shook the world. An unexplained solar storm struck the earth, shifting it four degrees south on its axis. Everything went dark. Humanity was on the verge of despair. Then a man named Camden Ford discovered a set of ancient books called the Chronicles of Satraya.

Thirty years later, the world is a different place. Thanks to the teachings of the Chronicles, hope has been restored, cities rebuilt, technology advanced. The books also have a different owner: Logan Cutler, who inherited them when Camden mysteriously disappeared. But when Logan auctions off the books to pay his debts, they fall into the wrong hands. The Reges Hominum, a clandestine group that once ruled history from the shadows, is launching a worldwide conspiracy to regain control.

Soon Logan realizes he’s made a terrible mistake. With the help of special agent Valerie Perrot and the wisdom of the Chronicles as his guide, he embarks on an epic quest to get the books back before it’s too late.

Abounding with questions about humanity’s secret past and its unknown future, Journey into the Flame will not only take you to the start of an incredible new world, it will also take you deep into the greater mysteries of the self.

T. R. Williams divides his time between Seattle and Chicago. He is a scholar of ancient texts and loves to ponder the mysteries of life.

"A spiritual adventure full of suspense and mystery... [T.R. Williams] has cleverly woven his advanced knowledge of secret wisdom into a thrilling, fast-moving story that will keep you on the edge of your seat."
— Rhonda Byrne, author of The Secret

"An imaginative story filled with intrigue, suspense and deep wisdom, all set in a post-apocalyptic world where the stakes couldn’t be higher… Journey Into the Flame is a spiritual adventure of the first order."
— Felix Palma, New York Times bestselling author of The Map of Time

“T.R. Williams’ novel Journey into the Flame is a thought-provoking evolution of the dystopian genre. Where others have simply used economic and ecological apocalypse as elaborate set dressing, Williams plunges into the deeper meaning and significance of a world that has literally come off its compass. The result is a bold and exciting odyssey that not only entertains, but also asks every reader to question the greater purpose of their own existence and the world around them. Journey into the Flame is a modern myth, and we'll all be better off for the message it may communicate to us about ourselves and the nexus of science and spirituality in which we live."
— Gotham Chopra, author of Walking Wisdom

"This race-against-time, postapocalyptic adventure keeps us flipping the pages, and the book’s wide-open ending cries out for volume two."
— Booklist

“A ripping yarn! A clever and intricate spin on the post-apocalyptic theme that is so popular. This stands head and shoulders above the crowd."
— Cayacosta Review

“A futuristic Da Vinci Code mixed with bits of Brave New World and a big scoop of deep spiritual wisdom, Journey Into The Flame compounds all my favorite genres into one juicy read. This mystical thriller is thought-provoking and satisfying.”
— Arielle Ford, author of Wabi-Sabi Love