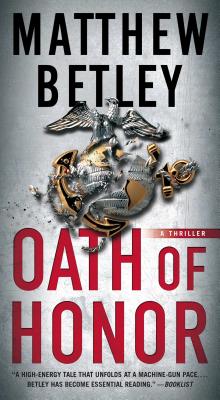 This is book number 2 in the The Logan West Thrillers series.

“A high-energy tale that unfolds at a machine-gun pace…Betley has become essential reading.” —Booklist

A global conspiracy threatens America’s position in the current balance of power in this “story of action, history, and secrets that is as imaginative as it is compelling” (Steve Berry, #1 New York Times bestselling author) from the author of Overwatch.

Roughly two years after the events of Overwatch, Logan West and John Quick are sent to Alaska to investigate the possible presence of a Russian black ops team on a mission to steal American next-generation technology. The resulting violent confrontation triggers a global search for the stolen technology and threatens to pit the United States against China in a looming shadow war and technology race. As Logan and John—now joined by the chief of the CIA’s Special Operations Group, Cole Matthews—battle their way through Spain, the Mediterranean, and ultimately, across Sudan, an imminent threat arises at home that FBI Deputy Director Mike Benson must face and determine if it is part of a deadly global conspiracy.

As New York Times bestselling author Kyle Mills raves, “Betley continues to turn the screws with the relentless action, unbearable tension, and terrifying threats that we all loved in Overwatch. With Oath of Honor, he cements his position as one of the genre’s new stars.”

Matthew Betley is a former Marine officer of ten years. His experience includes deployments to Djibouti after September 11, and Iraq, prior to the surge. A New Jersey native who considers Cincinnati home, he graduated from Miami University in Oxford, Ohio, with a BA in psychology and minors in political science and sociology.

“There’s tension, turmoil, and drama on every page.  It’s a story of action, history, and secrets that is as imaginative as it is compelling.  Add this one to your keeper shelf.”
— Steve Berry, #1 New York Times and Internationally Bestselling Author of THE PATRIOT and THE 14th COLONY

"Betley continues to turn the screws with the relentless action, unbearable tension, and terrifying threats that we all loved in Overwatch. With Oath of Honor, he cements his position as one of the genre's new stars."
— Kyle Mills, #1 New York Times Bestseller

"A riveting thriller, this is definitely one of those books you can't put down and will keep you up at night! Besides an action packed story with constant twists and turns, you will also come to feel like these characters are your best friends. You will be rooting for them and holding your breath when they get into a tight spot. This book took me on a ride that I just didn't want to end."
— Joan Lunden, New York Times bestselling author and award-winning journalist

"Oath of Honor is a terrific thriller. Matthew Betley puts his experience in the Marine Corps to excellent use in crafting an action-packed story full of daring heroes, nasty villains, and neck-snapping twists. The adventure starts with a bang from the first page, so prepare yourself for a rocket-powered roller coaster and enjoy the ride!"
— Boyd Morrison, #1 New York Times Bestselling Author

"Matthew Betley's Oath of Honor is a relentless, pulse-pounding adventure that will leave you breathless. Make room at the top of the genre, there's a new king of high-concept political thrillers!"
— The Real Book Spy

"A gripping, fast-paced, and frighteningly real tale told with bravado and expertise by someone who was there! Wall to wall action from start to finish. You will not put this book down!"
— Christopher Reich, #1 New York Times bestselling author

"Gunplay, bone-crushing unarmed combat, and plenty of sarcastic one-liners carry the narrative.  Those thirsty for a storyline centered on sharp vengeance against America’s most notorious nemeses will be satisfied with this novel."
— Kirkus Reviews

"Betley’s fight scenes are among the best in the genre."
— Publishers Weekly

"Oath of Honor is one of the most exciting books you'll read this year."
— Just Another Damn Book Blog

"Matthew Betley is without question the genre's brightest new star . . . must-read for fans of Tom Clancy, Ben Coes, and Vince Flynn."
— The Real Book Spy, Binge-Worthy New Series that All Thriller Fans Should be Reading