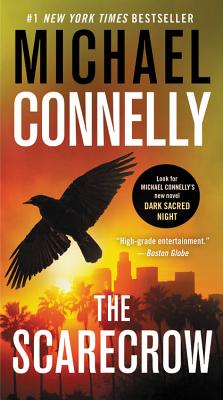 This is book number 2 in the Jack McEvoy series.

"Michael Connelly...has the nerve and timing of a whole SWAT team."--New York Times

"Michael Connelly...adds the intricate plotting and perfect-pitch dialogue that keeps The Scarecrow scary. Together, they hook the reader early and never let up."--Philadelphia Inquirer

"An addictive read that, once it grabs you in those first few pages, won't let go of you."--Boston Globe

Forced out of the Los Angeles Times amid the latest budget cuts, newspaperman Jack McEvoy decides to go out with a bang, using his final days at the paper to write the definitive murder story of his career.

He focuses on Alonzo Winslow, a sixteen-year-old drug dealer in jail after confessing to a brutal murder. But as he delves into the story, Jack realizes that Winslow's so-called confession is bogus. The kid might actually be innocent.

Jack is soon running with his biggest story since The Poet made his career years ago. He is tracking a killer who operates completely below police radar-and with perfect knowledge of any move against him. Including Jack's.

Michael Connelly is the author of thirty-one novels, including #1 New York Times bestsellers The Late Show and Two Kinds of Truth. Connelly is a former newspaper reporter who has won numerous awards for his journalism and his novels and is the executive producer of Bosch, starring Titus Welliver. He spends his time in California and Florida.

"Connelly is such a master of the genre... For over two decades, he has been brilliantly updating and enlarging the possibilities of the classic L.A. hard-boiled novel."—Washington Post

"A Connelly novel is a thing of cool beauty."
—Chicago Tribune

"Connelly continues to discover new depths to his character and new stories to tell that reveal those depths in always compelling ways."—Booklist (starred review)

"Michael Connelly is the master of the universe in which he lives, and that is the sphere of crime thrillers. This man is so good at what he does."—Huffington Post