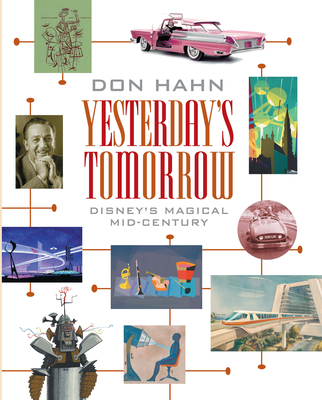 Academy Award-winning filmmaker Don Hahn paints the incredible story of Walt Disney and his artists who influenced mid-century style and design with their modernist approach to films, books, architecture, and urban planning.
Yesterday's Tomorrow is a valentine to an era of optimism, relaxed lifestyle, and innovative design; a large-format, general audience book, illustrated with rarely seen art and photography of the mid-20th century reflecting the unique style that Walt and his artists contributed to the era. If you've seen Sleeping Beauty, read Dwell Magazine, shopped at Design Within Reach, or watched Mad Men, this book is for you and all those who love this extraordinary era of Disney.
Searching for that perfect gift for the Disney theme park fan in your life? Explore more archival-quality books from Disney Editions:

DON HAHN is best known for having produced the classic Beauty and the Beast, the first animated film nominated for a Best Picture Oscar. Hahn has authored a number of books, including Before Ever After, Animation Magic, The Alchemy of Animation, and Brain Storm: Unleashing Your Creative Self. He's also compiled and edited Drawn to Life.

PRAISE FOR YESTERDAY'S TOMORROW"Disney Editions hasn't forgotten the Disney nerd. Yesterday's Tomorrows: Disney's Magical Mid-Century by Don Hahn, is a fascinating look inside the mind of Walt Disney and his Imagineers. It's an oversized, 176-page, hardcover book filled with stories about Walt's varying interests including Disneyland, transportation, entertainment centers, the World's Fair, and more. The book also features rare, never before seen photos and drawings."—Huffington Post

PRAISE FOR YESTERDAY'S TOMORROW"For about 20 years, between the end of World War II and the assassination of President Kennedy, America was obsessed with modern design. The abstract shapes and bold geometry of the space age created a new aesthetic that affected art, architecture, and every sort of creative endeavor. . . . Veteran animation producer Don Hahn explores the design and culture of the 1950s and '60s as seen through the eyes of Walt Disney. Modern angles crept into every corner of the Disney universe, screaming out from toy packaging, neon signs, and even the credit sequences in movies. The book's gorgeous endpapers are based on vintage Disneyland shopping bags."—Los Angeles Magazine

PRAISE FOR YESTERDAY'S TOMORROW"This feels like the book that many of us Disney aficionados (especially those whose childhoods coincided with the 'fifties and 'sixties) have long been waiting to read. Don Hahn presents a masterly tour of the Disney's futurism as it impacted not just on the creation and development of Disneyland but on film and TV, leisure and hospitality (The Disneyland Hotel, Celebrity Sports Center and the unrealized plans for a Ski resort in the Sierra), education (CalArts, the New York World's Fair and educational films and programmes) and Walt's final bid for a utopian future with the concept of EPCOT."—Brian Sibley, writer, broadcaster, and Disney scholar

PRAISE FOR DISNEY'S ANIMATION MAGIC: A BEHIND-THE-SCENES LOOK AT HOW AN ANIMATED FILM IS MADE

"Film producer Hahn introduces the process of making an animated film, using the team at the Disney studios and their work to show how these complex projects grow from ideas to finished products. . . . Children interested in filmmaking will find this informative, and browsers will enjoy an entertaining backstage tour."
—American Library Association Booklist