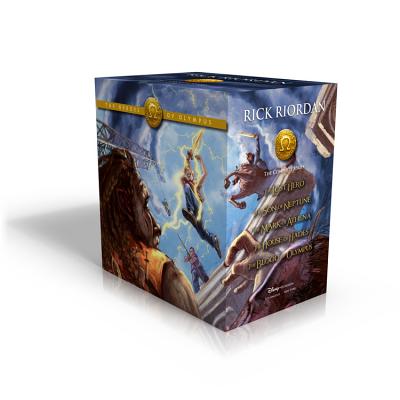 The exciting quest adventures featuring modern-day demigods and ancient monsters that Rick Riordan introduced in the Percy Jackson and the Olympians series are far from finished. Memorable characters (including Percy himself), witty dialogue, and non-stop action abound in this second Olympian series, which spans the United States, Europe, and even the underworld. Now all five books in the Heroes of Olympus series are available in a paperback boxed set of heroic proportions. FromThe Lost Heroto The Blood of Olympus, this collection will thrill loyal fans and be a go-to gift for readers new to the internationally best-selling series. Includes a stunning poster of the seven Greek and Roman demigods who form the Prophecy of Seven.

Rick Riordan, dubbed "Storyteller of the Gods" by Publishers Weekly, is the author of three #1 New York Times best-selling middle grade series with millions of copies sold throughout the world: Percy Jackson and the Olympians, based on Greek mythology the Kane Chronicles, based on Ancient Egyptian mythology and the Heroes of Olympus, based on Greek and Roman mythology. Rick collaborated with illustrator John Rocco on two best-selling collections of Greek myths for the whole family: Percy Jackson's Greek Gods and Percy Jackson's Greek Heroes. The first book in his Magnus Chase and the Gods of Asgard trilogy based on Norse mythology, The Sword of Summer, also debuted at #1 on the New York Times list. Rick lives in Boston, Massachusetts with his wife and two sons. Follow him on Twitter at @camphalfblood.

PRAISE FOR THE LOST HERO

"Readers longing for a return to Camp Half-Blood will get their wish.... ...the action scenes come frequently as the three heroic teens fight monstrous enemies in North American locales..... Flashes of humor lighten the mood at times, but a tone of urgency and imminent danger seems as integral to this series as the last. With appealing new characters within a familiar framework, this spin-off will satisfy the demand for more."—Booklist

PRAISE FOR THE SON OF NEPTUNE

PRAISE FOR THE MARK OF ATHENA

"With a true storyteller's sense of pacing, Riordan creates another compelling adventure, right down to the cliff-hanger at the end. Stay tuned for volume four."—Booklist

PRAISE FOR THE HOUSE OF HADES

"Fans won't be disappointed as the cliff-hanger ending from the previous book, The Mark of Athena, leads to further exciting adventures by the intrepid demigods. . . As Annabeth and Percy struggle to survive Tantarus's poisonous atmosphere and creatures, the other demigods must undergo harsh trials. . . but they learn and grow mentally and physically from their experiences. The heroes realize that they cannot change their parentage but they can control their legacy. Fans will be thrilled to know the series continues with The Blood of Olympus in 2014."—School Library Journal

PRAISE FOR THE HOUSE OF HADES

"In this adventure, victories are hard-won and the essence of bravery nuanced, making the journey as satisfying as it is entertaining."—Kirkus Reviews

PRAISE FOR THE BLOOD OF OLYMPUS