In the Company of Wolves (SWAT) (Mass Market) 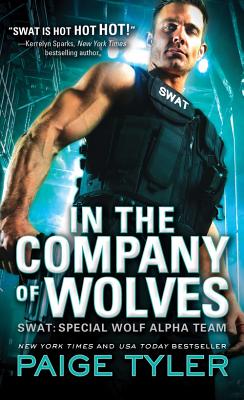 By Paige Tyler
$7.99
Backordered or Out of Print

This is book number 3 in the SWAT series.

He opened his mouth to order her to drop the MP5 she had aimed at him, but nothing would come out. It was like she'd robbed him of the ability to speak. Shooting her wasn't an option, though. And the idea of arresting her didn't make him feel any better.

There's a new gang of criminals in town who are organized and ruthless in the extreme. When Eric Becker, along with the rest of the Dallas SWAT team, ends up in the middle of a shootout, he immediately senses werewolves—a lot of them. Turns out, the new bad guys are a pack of wolf shifters.

In a spray of gunfire, Becker comes face-to-face with the most gorgeous woman he's ever seen. Becker does the logical thing. He hides her and leaves the scene with the rest of his team.

Jayna Winston has no idea why that SWAT guy helped her, but she's glad he did. Ever since she and her pack mates got mixed up with those Eastern European mobsters, everything had pretty much fallen apart.

So what's a street-savvy thief like Jayna going to do with a hot alpha-male wolf who's a police officer?

In the Company of Wolves

Readers are hungry for Paige Tyler's SWAT and X-Ops series:

"The action is nonstop and topnotch."—RT Book Reviews

"The sexy wolves of SWAT are not to be missed!"—J.D. Tyler, national bestselling author of the Alpha Pack series

Paige Tyler is the New York Times and USA Today bestselling author of sexy, romantic fiction, including the X-Ops series, the SEALs of Coronado Series, and the Alaskan Werewolves Series. She and her very own military hero (also known as her husband) live on the beautiful Florida coast with their dog. Visit www.paigetylertheauthor.com.

"Tyler takes the action to a new level by adding new dimensions to the SWAT team’s universe. As the weres learn more about their own shifting natures, they’re surprised by new beings in their midst." — RT Book Reviews, 4 Stars

"Tyler’s installments have a way of staying fresh while returning to the same group of heroes…action-packed, sizzling fun for fans of paranormal romantic suspense." — Booklist

"For romantic suspense readers, this novel has enough chases, fights, bullets, blood, drama, action, trepidation and heart stopping moments to cause an adrenaline rush. It’s riveting! definitely gets a thumbs up. This is an awesome book and an easy one to recommend. ...A new reader can jump right in and feel welcomed. Certainly, it’s one not to miss." — Long and Short Reviews