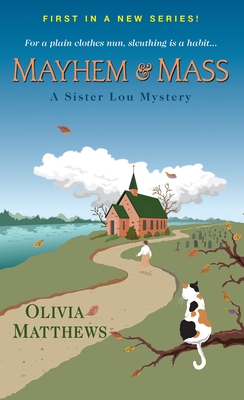 By Olivia Matthews
Email or call for price.
Special Order

This is book number 1 in the A Sister Lou Mystery series.

A Los Angeles transplant, Sister Louise “Lou” LaSalle feels right at home in Briar Coast, New York. After all, her beloved nephew, Chris, works at the college founded by her congregation. But while Sister Lou has always played by the rules, she’s about to have her faith in herself tested—by murder . . .

Sister Lou expects some pushback when she invites her friend, Maurice Jordan, to be the guest speaker for the St. Hermione of Ephesus Feast Day presentation. The theology professor is known far and wide for his controversial views. What she’s not prepared for is finding him dead in his hotel room, bashed over the head.

When the local deputies focus on the members of her congregation as suspects, Sister Lou takes matters into her own hands. Against Chris’s wishes, she teams up with a cynical local reporter to delve into Maurice’s life. The unlikely partners in crime-fighting uncover a litany of both devotees and detractors. And though it might take a miracle to find the killer, Sister Lou vows to carry on until justice prevails . . .

Olivia Matthews is the cozy mystery pseudonym of award-winning author Patricia Sargeant. A voracious reader, Patricia first realized she wanted to be a published author at the age of nine. She’s been inspired by writers such as Walter Mosley, Dick Francis and Tami Hoag, who've put ordinary people in extraordinary situations and have them find the Hero Inside. Her Sister Lou character was inspired by Catholic sisters whose courage, determination and faith have helped build communities and formed rich, lasting legacies. Raised in New York City, Patricia lives in Ohio with her husband. She loves to hear from readers. You can reach her at BooksByPatricia@yahoo.com. Visit her Olivia Matthews website, AuthorOliviaMatthews.com, and sign up for her enewsletter to learn about upcoming releases and events.

“The possibility of romance between two of the characters provides a pleasant foil to Sister Lou's pursuit of the truth for the sake of her old friend…in this debut of a saintly sleuth with some very human failings.”—Kirkus Reviews

“Although Sister Lou took the vow of obedience, she doesn’t always play by traditional rules, as readers of this first-in-the-new-series will soon find out. “Mayhem & Mass” is a promising addition to the cozy mystery genre, and its protagonist is delightful!” —Suspense Magazine

“Kudos to Olivia Matthews, who has created a new “hook” to draw in readers.”—Mystery Scene Magazine

“A spunky leading lady—who just happens to be a nun. Lou will go to the ends of the earth to uncover the truth. The plot is fast-paced and believable….A worthwhile mystery series here that fans will adore.”—RT Book Reviews