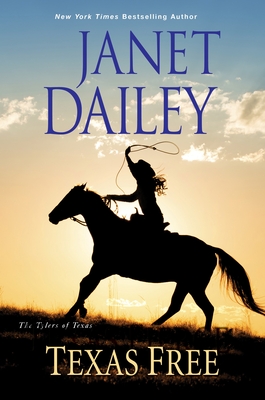 By Janet Dailey
$26.00
Backordered or Out of Print

This is book number 5 in the The Tylers of Texas series.

She’s a woman with a burning need to break free from her past . . .

Rose Landro is on the run. Seeking refuge at the Rimrock Ranch, she is finally ready to claim the land her granddaddy left her and make a fresh start. But her return is rife with controversy when cattle begin disappearing—and a handsome menace named Tanner McCade starts watching Rose a little too closely. Could the new cowhand be connected to the men she’s hiding from? Or is there another reason the rugged stranger is shadowing her every move?

There’s a secret in Rose Landro’s eyes, a mystery that Special Ranger Tanner McCade is determined to uncover. Even if the beauty isn’t behind the cattle rustling he’s investigating, she’s way too skittish, and all too exquisite for Tanner to just let slide past his piercing gaze. Then he discovers a vulnerability in Rose that has him aching to protect her—and longing to possess her. . . .

Praise for The Tylers of Texas series

“Dailey does the genre proud with plenty of intrigue, subplots, twists, and of course, love. Fans and newcomers alike will revel in this ride.” —Publishers Weekly on Texas Tall