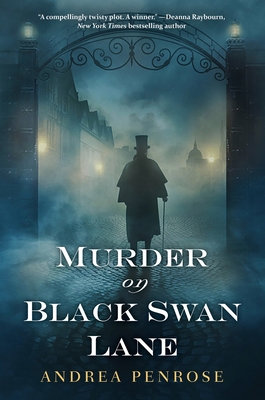 This is book number 1 in the A Wrexford & Sloane Mystery series.

In Regency London, an unconventional scientist and a fearless female artist form an unlikely alliance to expose a cold-hearted killer . . .

The Earl of Wrexford possesses a brilliant scientific mind, but boredom and pride lead him to reckless behavior. So when pompous, pious Reverend Josiah Holworthy publicly condemns him for debauchery, Wrexford unsheathes his rapier-sharp wit and strikes back. As their war of words escalates, London’s most popular satirical cartoonist, A.J. Quill, skewers them both. But then the clergyman is found slain in a church—his face burned by chemicals, his throat slashed ear to ear—and Wrexford finds himself the chief suspect.

An artist in her own right, Charlotte Sloane has secretly slipped into the persona of her late husband, using his nom de plume A.J. Quill. When Wrexford discovers her true identity, she fears it will be her undoing. But he has a proposal—use her sources to unveil the clergyman’s clandestine involvement in questionable scientific practices, and unmask the real murderer. Soon Lord Wrexford and the mysterious Mrs. Sloane plunge into a dangerous shadow world hidden among London’s intellectual enclaves to trap a cunning adversary—before they fall victim to the next experiment in villainy . . .

“Fans of C.S. Harris take note! A riveting ride through Regency London, from the slums of St. Giles, to the mansions of Mayfair.”—Lauren Willig, New York Times bestselling author

Andrea Penrose is the bestselling author of Regency-era historical fiction, including the acclaimed Wrexford & Sloane mystery series, as well as Regency romances written under the names Cara Elliott and Andrea Pickens. Published internationally in ten languages, she is a three-time RITA Award finalist and the recipient of numerous writing awards, including two Daphne Du Maurier Awards for Historical Mystery and two Gold Leaf Awards. A graduate of Yale University with a B.A. in Art and an M.F.A. in Graphic Design, Andrea fell in love with Regency England after reading Pride and Prejudice and has maintained a fascination with the era’s swirling silks and radical new ideas throughout her writing career. She lives in Connecticut and blogs with a community of historical fiction authors at WordWenches.com. She also can be found at AndreaPenrose.com and on Instagram @AndreaPenroseBooks.

“Fans of C.S. Harris take note! In this new, Regency-set mystery series, the artist Charlotte Sloane and the scientist Earl of Wrexford are the perfect mismatched pair of sleuths. A riveting ride through Regency London, from the slums of St. Giles, to the mansions of Mayfair.” —Lauren Willig, New York Times bestselling author

“A wonderfully engaging Regency mystery, with a most determined heroine and an engaging pair of street urchins at her side. Historical chemistry meets alchemy, and only a nonchalant nobleman can help solve the murder. A delight of a book.” —Joanna Bourne, award-winning author

“A female 19th-Century cartoonist as an amateur sleuth is a welcome innovation.” —Publishers Weekly